PRSA Assembly delegates were told in teleconferences yesterday that allowing non-APRs on the national board would be the death knell of the APR program.
Wed be shooting ourselves in the foot, said the delegate.

Impassioned APRs argued for nearly an hour in two teleconferences against any pullback from the 46-year old program that for decades has been ignored by more than 80% of members.

Only 904 Society members have become APR in the past six years, which represents a decline of more than 50% in participation by members over the two previous six-year periods. 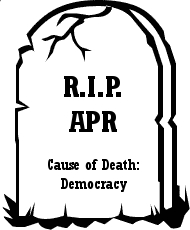 When Art Stevens, a leader of the group wanting a rules change said in an E-group that this issue was Democracy, everyone, DEMOCRACY, delegate Thomas Duke shot back that the Society was not a democracy but a republic.

According to Wikipedia, democracy and republic are the same, the U.S. being a republic.

Duke also said that many chapters poll their members to learn what they prefer regarding Assembly issues.

[Editors note: None of the 110 chapters has conducted a binding vote on the APR issue; Stevens has said that if such votes were taken the 80% non-APRs would easily vote the APRs out of power].

Several pro-APR delegates, including former director Steve Lubetkin, said they were fed up with the APR question being brought up repeatedly and demanded that the subject of removing APR for board service be permanently dropped.

However, other delegates noted that the subject only made it to the floor of the Assembly once in the 11 years after it was first proposed by the Strategic Planning Committee in 1999.

Those in favor of dropping the APR rule said the one time the Assembly discussed the issue was last year when it was buried among lengthy discussions about the bylaws re-write.

Stevens, in the view of veteran members, continued to weaken his argument against the APR rule by repeatedly praising APR.

APR is a valuable tool, he said in a E-group posting, adding, I believe strongly in it.

His argument is that some PR executives are over-qualified for it to which the pro-APRs respond that they have no excuse not to take the 3.5-hour test and set an example for the entire Society.

Those in favor of a change argued that anyone who pays the full dues should be entitled to run for office and that prospective members should be warned that they will be second-class citizens in the Society until they pay another $385 and take the exam.

[Editors note: there is no such warning in any of the new member materials of the Society].

James Lukaszewski, who is among those against a change, asked that the focus be put on the future, rather than on a group of mostly anonymous individuals, whining because they lost a couple of votes or motions or whatever with the Assembly, and having lost, have now chosen this negative destructive, accusatory route to regain entry.

Lubetkin, showing impatience with those seeking a change, wrote that once again members were misunderstanding the issue.

He wrote: Requiring APR for leadership is not about proving their competence. Its about them making a tangible, public commitment to the credential that says, being credentialed by the organization where I want to be a leader is important. It shows my professional development for myself, and shows that I encourage the people I want to lead that I am personally willing to put my neck out that and take the time to prepare for an examination to test my abilities as a PR practitioner.

Critics of the APR program say its Achilles Heel is the APR Study Guide, http://en.wikipedia.org/wiki/Achilles'_heel a150-page booklet that is available free on the Universal Accreditation Board website. http://www.praccreditation.org/documents/aprstudyguide.


The Guide is written as if aimed at high schoolers and gives short shrift to media relations which remains one of the top, if not the top concern of PR pros, say the critics.

Page 102 of the Guide notes that Media relations questions account for 5% of the computer-based Examination.

This is an absurd proportion for such questions, said a PR pro.

The first paragraph that follows is an indication of the elementary prose style of the rest of the Guide:

Media Relations is an integral part of most public relations programs. Public relations professionals interact
with the media both proactively and reactively. The overall goal of good media relations is to establish
relationships with representatives of the media that foster accurate, balanced, and timely release of your
organizations information.

Whether dealing with a mass media outlet such as a network reporting global issues, or a specialized medium
such as a trade journal concerned only with an industry segment, relationships are enhanced when public
relations professionals first conduct research to become familiar with what specific media organizations
cover. Receiving news that is unrelated to their audience profile only serves to diminish the media trust and
respect that is so important to achieving coverage of stories."

Other professors are quoted as saying that, At different times, people have different views about issues, and, as Prof. Jim Grunig points out, they become a type of public that will respond to an issue in a specific waypublic debate may include publicity, staged events, polls, appeals, etc., over a period of time. This leads people to make up their minds.

A section on ethics for PR people says that loyalty to client comes first.


The public relations professionals greatest loyalty is typically to the client/employer; you are
obligated to provide counsel and communications support that serves the best interest of the
organization. At the same time, responsible advocacy requires that the interests of those
affected by the decision be considered as well. In this case, numerous publics could both rely
on this information and be adversely affected.

Critics of APR say an examination of the Study Guide will quickly reveal that the APR exam is at the college freshman level at best and that taking the exam proves nothing except that a Society member has spent $385 for a 3.5-hour multiple-choice exam that tests for neither writing skills nor creativity.

At no part of the APR process, including the Readiness Review, is a candidate required to show creativity, say the critics.

APRs are the doctrinaire fundamentalists of the PR Society who are mired in the past and apparently incapable of change, say the critics.
Another explanation is that theyre really a political party with a chokehold on the Society that they will not give up, no matter how much harm they do to themselves, the Society, the PR industry and the nation.

This is the first time in their lives that most of these people have had any power over anything and theyre loathe to abandon it, say those who want to bring democracy to the Society.