Political pundits today say the Tea Partys impressive wins last night in Delaware and New York are signs that conservatives are fed up with the Washington establishment GOP. They pontificate about the Tea Party victories being good news for Democrats. Thats bunk.

The pitchfork crowd is ten times more motivated than Democrats who feel betrayed by their own crew in D.C.

Freelance PR woman Christine ODonnell may be nutty, as Republican guru Karl Rove says, but she generated more enthusiasm than her opponent, 71-year-old Mike Castle, who seems to have been involved in Delawares politics forever. 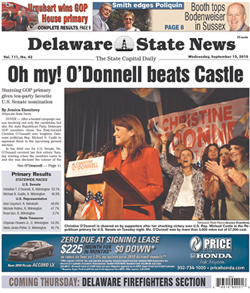 Delawares GOP party boss Tom Ross called ODonnell unfit for even dog catcher. He dismissed her as delusional and kooky. After Castles six-point thumping in the GOP Senate primary, it appears that Ross is the guy who suffered delusions.

ODonnell, who did PR for Mel Gibson's "Passion of the Christ," now faces New Castle County Executive Chris Coons, who is billing himself a progressive Democrat.

In the deeply blue Empire State, right-wing nut-job Carl Paladino destroyed Rick Lazio to win the GOP gubernatorial primary. Buffalo-based Paladino campaigned as the candidate who is mad as hell and now faces another member of the establishment, Andrew Cuomo. The son of former New York Governor Mario Cuomo kicked off his advertising campaign today, highlighting his political experience and role as corruption fighter as the states Attorney General. How boring!

Take off the gloves, Andy. Experience is not what voters want these days. Get your ad people to highlight screwy Carls idea to send welfare recipients to work camps and his comparison of Assembly Speaker Sheldon Silver, an Orthodox Jew, to Hitler and the Antichrist before Paladino gains any more momentum.

A scary thought: the last New York governor from Buffalo, Grover Cleveland, became president of the U.S. Cleveland is remembered as the only American President to serve two non-consecutive terms.

A two-term Paladino presidency would be a national nightmare.