Almost all of the more than 100 postings in the PR Society of America e-group on the APR issue contain the words profession or "professional."

"If a professional is truly dedicated to PRjust follow the rules and take the test," said Universal Accreditation Board chair and Assembly delegate Anne Dubois.

One of the functions of the Society is to "encourage members to enhance their knowledge and professionalism," said David Simon.

Repetition of the words "profession" and "professional" apparently make the writers feel good about their jobs.

Society members might have a better claim to belonging to a profession if they followed the policies and practices of the three major professional groupsAmerican Bar Assn., American Medical Assn. and American Institute of CPAs.

Practitioners of all three are state-licensed and subject to discipline for infractions.

The PR Society had a process for adjudicating complaints, including hearings before judicial panels, until 1999 when it abandoned enforcement.

The Chartered Institute of PR, U.K., and the German Council for PR both have active ethical enforcement programs.

Public rebukes are issued by the German group for alleged violations of its code.

The legislative bodies of the ABA, AMA and AICPA that are the equivalent of PRSAs Assembly sit over the boards and are the "ultimate authority" on policies that the boards carry out.

The opposite is true at the PR Society. An attempt to model Society governance after that of the three major professional groups won support from only one of the 110 chaptersCentral Michigan, which proposed it.

PR Society board dominance of the Assembly is blatant. Directors and staff give speeches by the hour sometimes illustrated with 100 or more slides. There has been no time for a Town Hall in the last three Assemblies.

Consultant Jean Frankel led a strategic dialogue in 2008 on certification, licensing and APR that took up two hours of the Assemblys time, leaving no time for a Town Hall.
Ignored are annual pleas by delegates for leaders to submit their speeches a week or so in advance and allow more time for Assembly discussion.


Press Boycotts Unthinkable at Other Groups

The PR Society has instituted two boycotts against the ODwyer Co., including a current one that was delivered to us in our offices by chair Gary McCormick and COO Bill Murray in March.

Calls to the ABA, AMA and AICPA found no such boycotts have been issued in their entire histories.

None has ever tried to charge reporters for admittance to their semi-annual meetings.

The meetings of the 263-member Council of the AICPA are open to the public. The names of the Council members are posted on the AICPA website (PDF). Reporters who attend do not need credentials and they may sit among Council members rather than being kept in the back of the room as they are at the PRS Assembly.


No Definition of PR Person

There is no accepted definition of a PR person. The Society last year tried to insert the word communications throughout the bylaws so that advertising, marketing, promotional and other occupations could be solicited as members.

PR as a term was mostly replaced by the term "communications" decades ago at major corporations.

PR Seminar, the annual gathering of blue chip corporate and media executives and editors, announced it was removing "PR" from its name two years ago. It still uses "PR Seminar" on its Form 990 filing to the IRS. 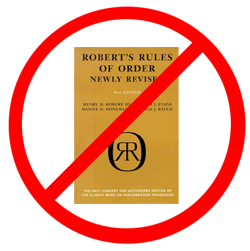 The ABA, AMA and AICPA all have sizable "deferred dues" accounts equal to about six months of dues income. A basic principle of accounting is that income is booked as earned.

Unprofessional behavior of the PR Society includes breaking five major rules of Roberts Rules while at the same time claiming that RR is the "parliamentary authority" of the Assembly.

These are rules that say an assembly of a group must sit over a board; proxy votes are barred; a bylaws revision should be done in a series of meetings and not at the regular annual meeting; all articles of a revision must be brought before an assembly, and any tabulated votes must be in the minutes of the meeting.