"Even in these days of pervasive social media, building a solid and lasting relationship with the press lies at the heart of the practice of public relations," says Fraser Seitel, author of "The Practice of Public Relations," in the new 11th edition of the textbook.

The statement appears on the first page of the 480-page edition published by Prentice-Hall, a unit of Pearson Education. 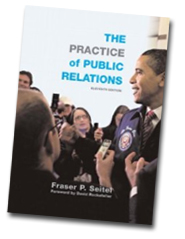 Seitel has written a twice-monthly column for this website for the past seven years. He is the only PR textbook author whose latest views are available online, often within a day or two of the eruption of a crisis or PR issue.

New material in the 11th edition includes an interview with White House Press Secretary Robert Gibbs and a new chapter on "Launching a Career," part of which describes 11 websites for job-hunting. Each of the 20 chapters has a mini-case history involving PR ethics.

The textbook, which pioneered use of PR case histories, has 11 new ones including crises involving Jet Blue, the auto industry bailout, Michael Vick, and Don Imus.

White House Press Secretary Scott McClellan, who wrote that he lied in behalf of President George W. Bush, is criticized by Seitel for being disloyal to an employer.

Shorter interviews are with Al Neuharth, founder of Gannett; Richard Edelman, CEO of Edelman; Ray Jordan of Johnson & Johnson, and John Stauber, founder of the Center for Media & Democracy, a critic of PR.

Stauber says the job of reporters is to make the work of PR people as visible as possible and eliminate hidden persuaders.

A foreword by David Rockefeller, former CEO of Chase Manhattan Bank -- where Seitel worked from 1977-92, rising to SVP and director of PA -- says that "Opaque, confused, and inadequate communications by business and financial leaders characterized the 2008 financial crisis."

"Unfortunately," Rockefeller added, "their political brethren have not done much better in explaining what happened and what they are going to do about it. As a result all our institutions are under unprecedented stress and scrutiny."

Rockefeller says, "The dissemination of principled policies by seasoned PR professionals will allow the rest of us to understand the basic issues and lead to the formulation of more appropriate and effective policies." Rockefeller said he learned to trust Seitel's instincts and abilities at Chase and "continues to rely on his advice to this day."

Rockefeller is the son of John D. Rockefeller Jr. who hired Ivy Lee for PR in the early 20th century. Lee, says Seitel, "deserves recognition as the real father of PR."

Lee opened a press bureau for Standard Oil in 1906 with the promise that its function would be to "answer all press questions most cheerfully."

A chapter on the internet and social media includes an interview with Internet specialist Hoa Loranger, co-author of "Prioritizing Web Usability."

She advises internet users to "keep it short and sweet" and avoid terminology or jargon. "Writers often overwrite and choose hype over simplicity," she says, adding: "Sophisticated verbiage makes people work hard to find the information they need."

She advises word count of "about half of that used in conventional writing" and says the worst thing a PR pro can do is confront a reader with "a large wall of text."


Book Is Dedicated to Weingarten

Seitel dedicates his 11th edition to Washington Post columnist Gene Weingarten, who excoriated PR pros in columns that ran May 20 and Nov. 25, 2007.

The initial column gave some of the same criticisms as Loranger.

Weingarten complained of being deluged with incomprehensibly written press releasesthat were crammed with jargon. One word never suffices when 16 can do the jobbig, important-sounding words are better than small clear ones. Plans are initiatives and they are not begun, but implemented.

Weingarten then decided to call some of the PR pros listed on the releases to get more information. He reports he had little success.

In a second column on PR Nov. 25, 2007, Weingarten complained of having to spend the first 15 minutes of each day deleting PR e-mail messages.

He blamed media-list companies for mistakenly categorizing him as a lifestyles reporter. Efforts to have his name removed failed, he says.

Weingarten blasted as an evil entity the unholy alliance between PR and the soulless marketing industry that categorizes people by the likelihood they may be cajoled or deceived into making silly discretionary purchases they cannot afford.

The third right-hand page of the new Seitel book has this inscription:

"Dedicated to Gene Weingarten, Washington Post columnist and avowed enemy of public relations, who lacked the courtesy to respond to four e-mails and one FedEx request for an interview for this book. Nonetheless, I still love him."