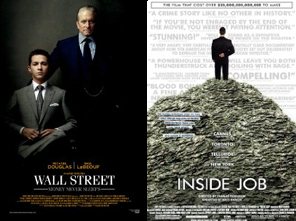 Wall Street, banks, business in general, academia, and the press take a licking in two current moviesWall Street with Michael Douglas and Inside Job with Matt Damon.

Both spell out the reasons for the economic collapse of two years ago that has touched the lives of every American, causing immense pain. That pain persists and will linger a long time.

There is a line in Wall Street to the effect that, for the sake of money, media went along with the lies and evasions just like everyone else.

The more detailed movie is Inside Job, which is given an ecstatic review by the New York Times (hard to imagine a movie more serious and more urgenta call to arms).

The New York Post, meanwhile, slammed it with one star, saying it was an incoherent but thoroughly outraged documentary about the financial crisis.

It notes that valid criticisms have been made many times before about Wall Street but that sufficient blame is not being put on Fannie Mae and Freddie Mac, government entities that swallowed the bad housing loans made by local banks. Greed is not a crime, says the review.


PR: Home Equity Loans, Credit Default Swaps
Business leaders used PR to mislabel things including second mortgages as home equity loans. Credit default swaps turned out to be insurance on speculation. Nothing was swapped. The insurers didnt even have the money to back up their failed bets so the U.S. public swallowed them.

Business professors are accused of being corrupted by consulting fees, seats on boards, and memberships in the masters of the universe club.

This is also true in PR where no PR professor dares say a peep about all the shenanigans going on at PRSA including 30 years of undemocratic dominance by APRs; withholding transcripts of Assemblies and Assembly delegate lists; refusing to audiocast the Assembly; withholding of membership lists in convenient form; delaying publication of IRS Form 990, etc.

PR academics prize APR as a tangible credential. They have successfully fought since 2000 students joining PRS in the 3,700 colleges that dont have Society student chapters. Only 300 have such chapters.

Academics, by the way, will hold five of the 17 seats on the 2011 board and dominate the Society these days.


PR Not Allowed to Be Conscience
PR failed in its claimed role of being the conscience of employers. Its as much at fault as Fitch, Moodys and S&P which certified toxic bonds.

PR especially failed in its job of getting out the factsholding press conferences and otherwise putting principals in front of the press.

PR people have to eat and they can only do their jobs to the extent that their employers allow them to do that.

The NYT notes that many of the highest-profile players declined to be interviewed for Inside Job.

We encounter lots of similar press-dodging. Art Stevens and Steve Lubetkin, who argued at length about APR in a Society e-group, refused to come to our offices for a debate. They wouldnt debate anywhere else either.

Parliamentarian Colette Trohan does not respond to us although wed love to ask her how Roberts Rules can be cited when the Society has done every bad thing to RR except burn a copy of it on the stage of the Assembly.

HGTV, where McCormick is employed in sales (hes not listed in the PR dept.), helped to contribute to the housing madness with programs such as Designed to Sell, House Hunters, and My House Is Worth What?

Even worse were shows called Flip that House (TLC) and Flip This House (A&E).


PR Moves in for Kill
There is an epidemic of press evasion.

We are living in a time of PR ascendance, says the September/October Columbia Journalism Review.

CJR staffer Dean Starkman says that while journalism has withered, PR has bloomed like a rash.

He quotes The Death and Life of American Journalism by Robert McChesney and John Nichols as saying the ratio of journalists to PR people has dramatically declined.

A sense of empowerment comes through in the tone of PR professionals, writes Starkman. He should interview us.

Michael Wolff wrote in the July 2009 Vanity Fair that The balance of power has surely shifted from the press to political leaders and every day you can read it in (White House) press secretary Robert Gibbs cockiness and condescension.

Todd Purdom, writing in the September VF on Broken Washington, says lobbying is now the Fourth Estate and not the press. Wolff found that what press secretary Ari Fleischer gave the press was resistance.


PR Is Weapon at Kraft
The PR dept., by whatever name, is currently the Dept. of War at many companies. 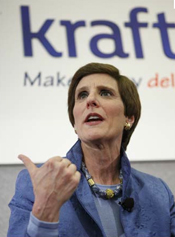 Irene Rosenfeld, CEO of Kraft, told the Arthur W. Page Society April 8 that she regards her corporate affairs dept. as our secret weapon that made possible the enormous transformation of Kraft. The dept. performed a crucial role in Krafts hostile takeover of Cadbury, said Rosenfeld.

Shes really talking a bout the PR dept. because the head of it is Perry Yeatman, a member of Page (made up of senior PR executives) and PR Seminar, which has many of the same people.


PRSAs Art Yann Illustrates Trend
So when PR Society VP-PR Arthur Yann tells us that three ODwyer reporters will have to pay $1,275 each or a total of $3,825 to cover the conference Oct. 16-19 were not surprised. Its the first time the Society has tried to charge us for attendance in 40 years.

Meanwhile, Scott Van Camp of PR News told us he has a free pass to the conference. Steve Barrett. Editor of PR Week and Jim Sinkinson of Bulldog Reporter wouldnt answer when we asked if they got free passes.

Another aspect of the Were in charge here press policy of the Society was the visit to our office March 19 by McCormick and COO Bill Murray who said the Society had decided not to deal with us. No reasons were given.

Another aspect is the severe press rules for the Assembly issued by Yann.

No recording is allowed and no pictures. Reporters must remain in a designated area at the rear of the Assembly and outside the delegate area. Otherwise, they will be evicted not only for the Oct. 16 Assembly but all future Assemblies.

Reporters are barred from the Assembly lunch, only the second time this has happened. First was in 2007 when chair-elect Jeff Julin was seeking ideas for the Strategic Plan at the lunch.

Associate editor/publisher John ODwyer is not allowed in the Assembly, says Yann, because he sells ads.

The Society has claimed we dont give it fair coverage and this no doubt includes our dozens of stories and more than 20,000 words on the attempt by the Committee for a Democratic PRSA to win places for non-APRs on the board. A debate on this subject has raged in a Society e-group.

PRW has done two stories on the APR issue and PR News, one.

Very few members have ever heard of the Committee for a Democratic PRSA. As of Sept. 25 there were only 557 views of the e-group debate (from among 21,000 members), according to Mark McClennan of Schwartz Communications, a delegate from the Boston chapter.


Parliamentary Trick Being Attempted
An attempt is being made to block the bylaw amendment that would let non-APRs on the board for the first time in more than 30 years.

This amendment was filed in plenty of time60 days. It said members would be eligible for the board if they met one of three requirements: APR, Society leader service, or 20 years in ever higher PR posts.

The main thrust was that APR was no longer a requirement.

As far as timely notification goes, ditching APR was proposed 11 years ago so leaders have had plenty of notification.

RRs obsession with protecting the rights of delegates ignores modern communications capabilities. Delegates not present can easily hear the proceedings via cell phones or an audiocast and give instructions to their proxies on the floor. The meeting is at least nine hours long and plenty of time for proxies to do such consultation.

Normally, four and five hours of the delegates time are wasted in leader presentations and programs. No town hall has been allowed for three years because of such time-wasting activities.

Opponents are now trying to scuttle the amendment by demanding that candidates have any two of the three requirements.

Society leaders have obtained an opinion from parliamentarian Colette Trohan that trying to add anything to the amendment is against Roberts Rules (although PRS is in violation of a least five such Rules which McCormick says is only advice anyway).

Trohan told a delegate teleconference last week that something could be taken away from the amendment (two qualifications could be reduced to one) but if any extra qualification were added that would have to wait until next year.

That provides a great excuse to the APRs who want to keep non-APRs off the board. The Universal Accreditation Board should remove the APRs from all 17 directors because they have used their APRs in a competitive situation, which is strictly forbidden under UAB Guidance. UAB has the power to remove APRs.

Trohan wont talk to us but we get replies from the RRForum. RR buffs there say that selective quoting of RR to further the interests of one faction or another is common.

As for a group that disobeys RR while citing it as an authority, there is no one to complain to. RR buffs say obedience to RR is on a strictly voluntary basis and anything in RR is only advice. McCormick said the same thing when asked in July about the Societys disregard of major RR rules such as the one against proxies.