The Gap has dropped the stylish corporate logo that it launched last week, scoring major PR points in the process.

A Facebook-led uprising savaged the contemporary design that was supposed to lead the San Francisco-based retailer into the future. The emblem, instead, led to outrage over the dropping of the iconic blue box that symbolizes the gapness of the Gap to many people. 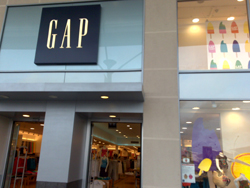 Rather than charging into the future chased by a hoard of angry consumers, Gap retreated to the safety of the box. It is a good move.

Executives at the Gap initially defended the Laird and Partners-developed logo, saying that it tested well internally. That was the root of the problem. After spending a tidy sum at L&P, what manager would object to the final product?

Gap should have tested the symbol on its passionate customer base, a group that doesn't give a fig about what management thinks? That shortcoming was acknowledged by Marka Hansen, President of Gap Brand North America. In a statement released yesterday, Hansen conceded the Gap missed the opportunity to engage with the online community. Hansen promises when the time comes for another logo switch, Gap will handle it in a different way.

That act of corporate contrition serves two purposes. It shows that Gap gets it. The company listens to its customers. The now-ditched Gap logo would have put devotee shoppers in a sour mood during the upcoming Christmas season.

Consumer attentiveness came slowly for PepsiCo, which dragged its corporate feet too long before restoring the beloved straw in orange image used on its Tropicana juice packages.

The other bonus is financial. In killing the offending logo, Gap saves millions in signage and promotions for its 3,100 store network, dollars that would have been needed to introduce the new symbol.

Now that Gap's management has moved beyond the logo kerfuffle, it can concentrate on stepping up the companys turnaround. Year-to-year comparable store sales (through Oct. 3) are up two percent compared to a six percent decline last year. Its apparent that more and more shoppers are taking the old fall into the Gap slogan to heart.

Will management restore the old slogan? It might not be a bad idea.