Rupert Murdochs News Corp., which has been shilling and shelling out for the Republican Party, is making investors queasy with the strident partisanship of the publicly held company.

Londons Telegraph reports that U.K. fund manager, F&C, has had it with Murdochs use of News Corp. as a GOP piggy-bank. F&C today voted against the re-election of former British Airways CEO and chairman of News Corp. audit committee Rod Eddington to the board of directors. 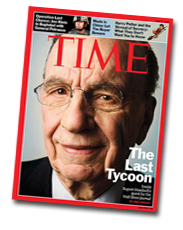 Katrina Livack, F&Cs governance and sustainable development head, said the against vote was over political contributions made by News Corp. in the U.S. We are concerned to see the company deploy shareholder funds for activities that are best left to individuals whose views they reflect and are not obviously a matter of concern for the company, she said.

The F&C vote is symbolic, but it's a start. Murdoch controls a 39.7 percent voting stake of News Corps voting shares and his family trust owns 38.4 percent. The 79-year-old Rupe has got to begin thinking about his legacy at News Corp. [Murdoch plans to be around for quite some time, often mentioning that his mother, Elisabeth, is a robust 101-year-old.]

Does Rupert want to be remembered as a global media empire builder or a right-wing hack?

While Fox News has long been the media arm of the GOP, the Wall Street Journal is following suit. Fox preaches to the choir, a rather tiny but vocal group. The Wall Street Journal, however, was among Americas most respected papers before News Corp got its hands on it. It is rapidly descending into FoxLand.

Each would make Glenn, Sean, Bill-O and the rest of the Fox fanatics proud. And then there is the WSJ editorial page that each day treats President Obama and Democrats as piñatas. Todays three editorials are Liberalism and Public Works, ObamaCare in Court and The Education of Barney Frank. And then the capper: the page one WSJ lede is Democratic Funding Fades.

With that editorial firepower aimed at the Democrats, News Corp.s $2M contribution to the GOPs U.S. Chamber of Commerce and National Republican Governors Assn., headed by presidential wannabe Haley Barbour, is overkill that opens the company to attacks like the salvo from F&C.

Rupe overplayed his hand. The anti-Murdoch backlash, which has been largely been from leftist groups, is going mainstream.