Those questions could be asked about the brands lining up next to the 33 rescued miners in Chile, or the miners themselves, who will likely command a hefty price tag for their story. 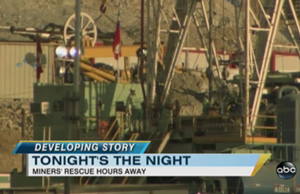 Before this week, a communications protocol from the Chilean government had previously put the kibosh on any press releases or other communications from contractors working on the rescue. According to that manifesto, dated Sept. 22, no interviews were to be granted without approval from the Secretary of Communications or Interior Ministry in Chile.

"Contractor personnel are not authorized to comment on the rescue efforts," read the protocol. "Information about the project and its progress shall be delivered only by the government or CODELCO, the state-owned mining company.

Those orders have apparently ended as the successful rescue kicked off and ended, and every news outlet worldwide seems to have a rescue engineer, family member or someone tangentially involved in the operation on the record.

Chilean imagemakers had President Sebastian Pinera Echenique at the top of the hole for the world's cameras to see, a PR stunt that gave the leader a 20-point bump in his approval numbers.

The PR floodgates have opened, evidenced by no less than the 33 pairs of $450 Oakley sunglasses being sported by the miners in every appearance.

Oakley said in a blog post that it was contacted by a freelance journalist based in Santiago who suggested the company to Chilean health officials.

CNBC pegged the advertising value for Oakley at $41M.

Panasonic also enjoyed some nice coverage of its Toughbook computer in action at the rescue scene, including action footage on ABC's "Good Morning America."

More nuanced releases came from Maptek, the mapping technology and services company, which said it was called in to assist with the rescue operation.

Maptek added a dramatic flair in its press release about the involvement:


Maptek Geologist, Sandra Jara, working the shift on 22 August, witnessed the first contact with the miners when she heard the men tapping on the drill as it entered the chamber where they were trapped.

She immediately telephoned Maptek South American Vice-President Marcelo Arancibia and exclaimed, "Marcelo, there is life down there!"

Kansas-based, publicly traded Layne Christensen Co. was actually involved in the drilling of the rescue hole and worked with its boutique PR firm, Pepperdine & Associates to get the word out.

Apple reportedly sent iPods, Graceland has invited one of the Elvis-adoring miners for a visit, and other offers of vacations, cash and even sushi have poured in. The Guardian reported that the sushi offer, from a Santiago-based company, was withdrawn and its chair apologized after it was criticized as a "crass" PR stunt.

And last (and perhaps least), came this little ditty from Elvis Entertainment in Las Vegas. We'll just let it speak for itself:


"LAS VEGAS, Oct. 15 /PRNewswire/ -- After nearly suffocating and starving to death, rescued Chilean miner and avid Elvis Presley fan Edison Pena has gotten a VIP invitation to meet Elvis himselvis in Fabulous Las Vegas. Elvis fan for many years, Pena was truly caught in a trap, and couldn't walk out (lyrics to Elvis Presley's famous song) and is invited to be celebrated in majestic style as only the Entertainment Capitol of the world can do."