Geico, Chrysler, JPMorgan Chase, Eli Lilly, Hartford Financial, GlaxoSmithKline, Zurich Financial and BP are sponsors of Glenn Becks program, which they have every right to be. They advertise on Becks show because they either want to curry favor with Rupert Murdoch's Fox News or believe that his audience is a prime target to buy their goods and services. 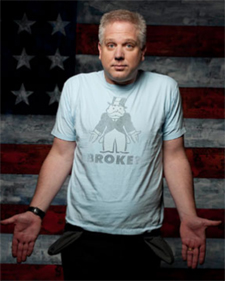 Beck may be laughing his way all the way to the bank, but his schtick inspires the lunatic fringe. Just ask Drummond Pike, CEO of the Tides Foundation, a San Francisco group that bankrolls lefty organizations. A deranged gunman, who was involved a 12-minute shootout with the California Highway Patrol, said he was inspired by Beck to kill Pike and members of the ACLU. Those murders were to trigger a revolution.

Tides is a frequent target of Beck. He has mentioned the foundation about 30 times, putting it among the nastiest of the nasty." To Beck, Tides has funneled money to "some of the most extreme groups on the left" and its mission is to "warp your children's brains and make sure they know how evil capitalism is," according to a letter written to the above companies by Pike.

This blogger supports Becks First Amendment right of self-expression. The sponsors, in turn, have the same right to spend their money wherever they like. It's still a free country. Both Fox and sponsors, however, must be aware that words have consequences.

We live in perilous times. Pike made that abundantly clear in his letter: "Beck pits American against American, telling his audience that our country is under attack by a demonic Nazi-like regime seeking to destroy all that is great about America while insisting it's up to his viewers to resist and revolt. He warned his audience that 'these are the most dangerous two years of our republic.'"

Pike wants companies pull advertising from Beck's program. The sponsors must decide if they want to be associated with a guy like Beck.

More from Pike: "The next 'assassin' may succeed, and if so, there will be blood on many hands. The choice is yours."

Just imagine the corporate fall-out, if that worst case scenario becomes a reality.