The real ad/PR campaign seeks to soften the edge of the energy giant by promising to deliver on goodies like renewable energy and protecting the environment. It's Chevron as born-again BP, before the spill. 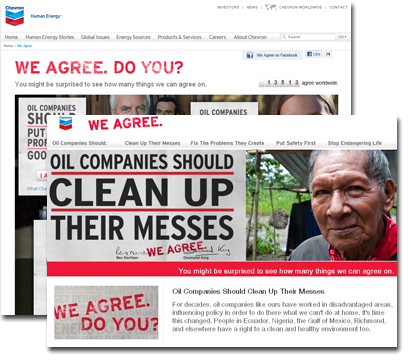 The activists dismiss the Chevron effort as little more than greenwash. Chevron has been fighting tooth and nail a $27B environmental lawsuit connected to its early 1990s acquisition of Texaco properties there.

A corporate release that announces the real campaign features a quote from Rhonda Zygocki, Chevrons VP of policy, government and PA.

We hear what people say about oil companies  that they should develop renewables, support communities, create jobs and protect the environment  and the fact is, we agree..."

"This campaign demonstrates our values as a company and the greater value we provide in meeting the world's demand for energy. There is a lot of common ground on energy issues if we take the time to find it."

A more forceful Zyglocki is featured in the bogus press release, which carries the quote that Chevron is making a clean break from the past by taking direct responsibility for our own actions. Bravo. That's action.

The fake ads carry none of the fluff that the real ones do. One fake ad says Oil companies should clean up their messes. The copy reads: For decades, oil companies like ours have worked in disadvantaged areas, influencing policy in order to do there what we cant do at home. Its time this changed.

Another bogus ad says Chevron is ready to accept our financial and environmental responsibilities, and fund new technologies to avoid these mistakes in the future. Fake Zygocki says: Were telling truths no one usually tells. Were changing the way the whole industry operates. That would be refreshing indeed and a blast of fresh PR.

A modest proposal for Chevron: how about taking the activist campaign to heart? Fake Zygocki puts it best: We Agree conveys that Chevron is all for people. Just as We is inclusive so Chevron is inclusive. Its time we were on the side of people, no matter where those people are from.

The Yes Men promise to have more fun with Chevron. Stay tuned.