For the second year in a row, Assembly delegates were deprived of the information in the 990, which includes the salaries of the eight highest paid staffers.

The form is not on the Society website nor accessible via GuideStar or Foundation Center 990 Finder. 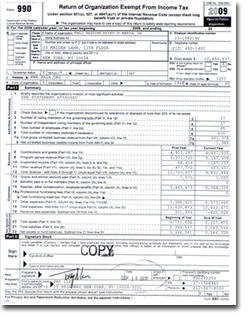 Two law firms work for the Society  the 600+ lawyer firm of Venable in D.C. and Sifton & Salimi in Brooklyn (Ann Thomas).

Neither he nor the board will reveal terms of his new two-year contract that started in January 2010.

VP-PR Arthur Yanns pay was listed for the first time, $137,687, making him the fourth highest paid staffer. The amount of benefits is not shown.

The Society this year removed from the website names and contact points for all but seven of the staffers.

There were 25 Society employees at the conference in D.C. this week including some names we had not seen beforeAnn Caggiano, Robert Denbo, John Gumbiner, Cecelia Hughes, Richard Spector, Keith Trivitt and Melissa Yahr.

The salaries/fringes accounted for 54% of expenses when the average percentage for groups with $10M in expenses is about 35% of expenses. Pay/benefits took 58.9% of income of $6,621,435 for the nine months.

PRSA did not pay its first years rent and reported $592,278 in accrued rent expenses in its nine-months report.