The Wall Street Journals front page yesterday assured skittish readers that leadership of a Republican controlled Congress would reach out to Democrats to get the nation's business done.

GOP leaders will push a "post-election strategy aimed at securing concrete legislation, even at the potential cost of compromising with Democrats," reported Rupert Murdochs newspaper. Wink, wink. In other words, the present minority "Party of No" will suddenly see the light once they are in command of the governing process. Believe that, and boy do I have a bridge to sell you. 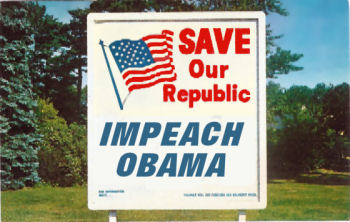 Impeachment of President Obama is the logical pursuit of Republicans who represent a core base that never accepted the legitimacy of the Obama president. Go figure. The president has been ridiculed as a Kenyan-born closet Muslim bent on taxing people to death and taking away their personal freedom and guns (the United Nations is said to be in cohoots with Obama on the firearms grab) of every single God-fearing red-blooded American.

It gets worse. Forget about "de-legitimizing Obama's presidency, a quarter of Republicans polled in March told Harris pollsters that Obama "may be the anti-Christ." As Michael Tomasky wrote in the Oct. 28 New York Review of Books, when your most loyal voters think Obama is anti-Christ, "not trying to remove the man from office would amount to malpractice."

A Republican congressional majority provides the GOP with subpoena power. Watch out for the new sheriffs in town. The Conservative Caucus has gotten the ball rolling with a direct mail piece demanding that the new Congress put an inquiry into impeachment on the top of its to-do list. Since impeachment requires a simple majority vote in the House, it is a foregone conclusion. Today's GOP is 110 percent more partisan than the crowd that impeached President Clinton. The House impeached Clinton on Dec. 19, 1998. He was acquitted by the Senate on Feb. 12. Clinton beat the perjury charge by a 55-to-45 margin in the Senate, which requires a two-thirds vote.

There's no doubt Republicans view impeachment as a tool to diminish the Obama administration and thus increase the partys chances to capture the top prize in 2012. The country can little afford endless investigations into all things Obama and the resulting bitter rancor connected to the persecution of the president.

The specter of impeachment should be enough to close the so-called enthusiasm gap among Democratic voters.

Theres no time to waste on a show trial of Obama when the country has important work to be done like ending two wars, creating jobs and developing a national energy policy.