Derek DeVries, PRSA Assembly delegate who spearheaded the pen gifting to us at the Assembly Oct. 16, says we have completely missed the mark in covering it.

DeVries, who teaches at Grand Rapids Community College and has his own firm, said there are a lot more angles to the pen-gifting than we have indicated.

Jack ODwyer Misunderstands PRSA 2010 Assembly Flash Mob he headlined in his blog Oct. 17 after he saw our story. 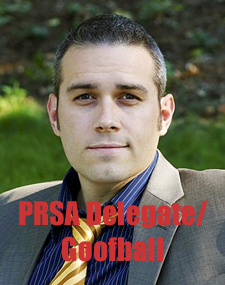 We interpreted the pen-giving by about 20 delegates as some sort of recognition which would be the worst nightmare of VP-PR Arthur Yann who has made clear his dissatisfaction with our coverage of the Society.

We were denied press passes to the annual conference of the Society while other trade reporters got them.

The Societys official stance is that we dont exist, a message carried to our office by chair Gary McCormick and COO Bill Murray in March. But the videotape is proof that we do.

DeVries et al have no idea how seriously they have dented the PR aimed at us by Society leaders and staff.

The pen-gifting was not confined to the Assembly.

The flash mob, said DeVries, was extended to the entire 2010 conferenceso if you see Jack ODwyer in the hall, take a moment to present him with the tribute of a disposable pen.

Disposable is the wrong term since the pens have a considerable life. It would be more accurate to say free or cheap hotel pens.

DeVries is now doing serious back-pedaling. He said in his blog that the pens were given by a bunch of goofballs like me who happened to be delegates.

What?! Society delegates are goofballs? This will not sit well with the Society PR staff or board. We thought the delegates were the crème de la crème of the Society.

The DeVries blog also slings a number of darts at us including were a curmudgeon, that like John Nash our version of reality does not match what is experienced by others (i.e., were nuts), that our description of the pen-giving was less than accurate, and that such inaccuracy will be no surprise to a lot of PRS members.

The pens recognized our tenacious if occasionally misguided work to cover the Society, he also said.

We challenge DeVries or anyone connected with the Society to show us anything inaccurate in any of our coverage. What Society leaders and staff engage in is a smear campaign that lacks details. Our opinions that they dont like are based on facts.

They never disagree. When we bring up criticisms such as withholding transcripts of the Assembly for the past five years, withholding names of delegates, or refusing to discuss making a PDF of the members directory, leaders just dont respond.

We publish fully documented criticisms of the Society but the leaders only respond with silence or undefined attacks such as were just too negative. They refuse to meet with us or even talk to us on the telephone.

Back-pedaling even more, DeVries tries to distance this gift-giving from any official act of the Society.

The Society had nothing to do with the flash mob, he said on his blog.


This reminded us of Anne Dubois, chair of the Universal Accreditation Board, saying she was not in that role when she made a comment on the Society e-group about non-APRs on the board.

DeVries is now giving us the same argumenthe stopped being a delegate and turned into a goofball when he gave the hotels disposable pen to us.

How many Derek DeVrieses are there, we want to know?

We posted on the DeVries blog that the reason for the Societys bashing of us is that were its No. 1 competitor.

Our website, with ten years of stories, editorials, databases, etc., as of Dec. 31, 2010, dwarfs its website, which is only partially searchable. Major stories like the Committee for a Democratic PRSA are barely touched on its website.

The October ODwyer magazine had 60 pages including 18 full page ads and 12 partial pages. The current Strategist of the Society has 50 pages and 10 full page ads.

While the Society talks about PR in general, each issue of the ODwyer magazine includes a focus on a specialty such as healthcare, tech or financial and provides documented net fee rankings of the leading firms in each category.

Specialization in PR is a trend that is at least 20 years old that is not addressed by the Societys APR program.

Certification of specialties was discussed a couple of years ago by Society leaders but little has emerged.

Other ODwyer products not matched by the Society are our Directory of 1,700 PR firms, our PR Buyers Guide to 1,000 products and services in 57 categories and our weekly newsletter.

The Society, we acknowledge, has many services that we dont provide. Both organizations should be working together for the advancement of PR people. But the Society decided long ago to wage competitive war against us.