Mark Penn, Burson-Marsteller CEO and advisor to Bill and Hillary Clinton, is among politicos who believes Sarah Palin will not only run for president but have a high likelihood of winning, if the economy fails to recover and President Obama doesnt get his act together.

Thats quite a turnaround from the smug attitude once held by Democratic establishment politicians who, pre-Tea Party madness, drooled over the prospects of a Palin candidacy. 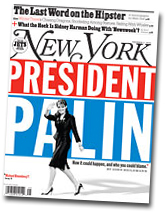 Penns solution for Obama -- moving to the center a la Bill Clinton -- is not exactly music to the ears of the president's progressive base. Penn is among experts quoted in the new issue of New York magazine that features President Palin on the cover. It's not a pretty picture.

A Bloomberg run seriously upends the apple cart. New Yorks political writer John Heilemann predicts a solid 40 percent of Democrats will stick with the president, while Palin can count on about 30 percent of the hard-core GOPers. Bloomberg picks up independents, lefty Dems and the few remaining moderate Republicans. Obama gets another four years.

Scenario No. 2: Bloomberg wins New York, California, Florida, New Jersey and Connecticut and edges Obama in some Midwest states. Palin nails the South to deny the President a win in the Electoral College. The race gets tossed into Republican-controlled House of Representatives and the pride of Alaska becomes Americas first female President.

Veteran GOP consultant Mark McKinnon offers a third way. Palin is so hot she becomes a supernova. Said McKinnon in New York: The only parallel is Barack Obama. And look what happened to him.

My question: Will Sarah flame out before Election Day 2012?

That could put Bloomie in the White House, powered by a coalition of disaffected progressives and anti-Obama fanatics who vote for New York Citys Mayor to shake up the status quo. Crazier things have happened.