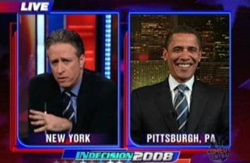 One expects howls by always-on Obama critics for demeaning the Office of the President by starring on a comedy show. Let 'em blow. The president is taking a page from the book of bank robber Willie Sutton, who purportedly told reporters that he robbed banks because thats where the money is.

Obama is sitting with Stewart at the Harman Center for the Arts in Washington, D.C., before a live audience in a blatant appeal to Stewart fans -- young voters who must show up at the polls next week if the Democrats have any chance to avoid a mid-term blowout.

Obama should take one step further. How about an appearance at Stewarts Rally to Restore Sanity event slated for the National Mall on Oct. 30? The president would also receive a warm welcome at Stephen Colberts accompanying March to Keep Fear Alive, as well.

White House Press Secretary Robert Gibbs told reporters yesterday that Obama is not going to attend the Stewart rally, organized as a counterweight to Glenn Becks revival meeting held last month. The White House should reconsider. Stewarts rally will attract the people who are at the core of Obamas base. Many have been turned off by the President for failing to deliver in key areas like Afghanistan/Iraq. They need to be tended to.

The president is at his best when his back is against the wall. He proved that in the hard-fought primary campaign against Hillary Clinton.

As the Nov. 2 election draws near, Obama and the Democrats certainly have their backs against the wall. The rally is a political gift to Obama. He should use it as a showcase to tout his many achievements, such as healthcare reform, tougher Wall Street regulation, saving General Motors/Chrysler, rescuing the banks while earning taxpayer returns via the TARP bailout, cutting taxes, and crafting an economic stimulus package (though too small) to save three million jobs.

It's now or never for Obama. Stewart, on the other hand, may be a a sensible president some day.