British Petroleum CEO Bob Dudley, the pride of Queens, New York, must be among the happiest men in the world today as news that Halliburton shares a big chunk of the blame for Americas worst environmental disaster.

The BP chief was heard this week squawking to London lobbyists about the media and political firestorm aimed at the energy giant in the aftermath of the Gulf of Mexico tragedy. He decried the rush to judgment concerning who is to blame about the disaster that took 11 lives. Life is tough, Bob. 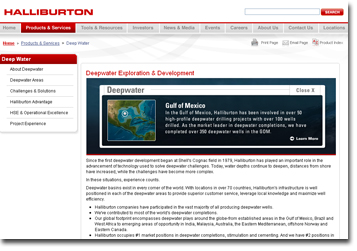 The presidential commission studying the massive oil spill released its report earlier this afternoon, finding that BP and Halliburton knew well before the Deepwater Horizon rig explosion that the cement mixture they used to seal the bottom of the well was unstable but still went ahead of the job, according to an online report in the New York Times. Wall Street bailed on Halliburton, driving down its stock price by 10 percent.

Unlike sensitive Bob, its a safe bet that Halliburton CEO (since 2000) Dave Lesar isnt going to waste time complaining about media coverage. Halliburton is a tough fighter in the crisis game.

Dick Cheneys old haunt was front and center in probes that its engineering unit ripped off U.S. taxpayers in Iraq, while providing shoddy service to the military. Halliburton aggressively defended the KBR engineering unit that was ultimately spun off to shareholders in 2007. The same vigorous defense can be expected for its operations in the Gulf.

Halliburton, which is now reviewing the Oil Spill Commission report, is going to have a hard job dismissing it as a hatchet job. The Commissions lead investigator is Fred Bartlit, who is hardly a critic of Big Oil. His firm, Bartlit Beck Herman Palenchar & Scott did legal work for Halliburton in the past, but has not represented the Houston-based energy services company since `05.

Its back to the future in the crisis PR game for Halliburton and chief spokesperson Cathy Mann.