The New York Times appears to be more concerned for the country's witches, than its Catholics.

In the spirit of Halloween, the Times published a piece about a witchs battle with Port Brewing Co.s Lost Abbey microbrew division over the use of an image of a witch being burned at the stake on one of its beer labels. Vicki Noble, co-author of Motherpeace Tarot Deck and publisher of "Snakepower and a leading member in the pagan and Wiccan communities, says she is a big fan of the beer called Witchs Wit, but believes the label represents hate imagery. 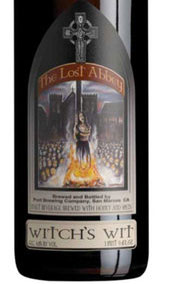 The Times apparently doesn't give a fig that the top portion of the stake is portrayed as a Celtic Cross. The paper of record mentions that Witchs Wit is one of Los Abbeys Catholic-themed beers with names like Judgment Day and Inferno Ale. Each label has a Celtic Cross.

The Times says the brews were conceived in the spirit of gentle satire by Tomme Arthur, one of the brewerys owners. He is described as a recovering Catholic. What exactly is Arthur recovering from?

Did it occur to New York Times editors that the use of the Celtic Cross might be offensive to Catholics?

Phyllis Zagano, columnist for National Catholic Reporter, took the Times to task with a piece called The Cross, The Witch and The New York Times published Oct. 27. The NYT will take a stand for witches rights and will join the chorus when any interest group is offended-- except Christians, Zagano wrote.

She dubbed the Times as far and away the leader in the Get the Church Derby. Zagano credits the Times for reporting "interesting and important parts of the ongoing pederasty saga, but it is clearly no friend of Catholicisms adherents or beliefs.

Happy Halloween! Times editors will probably celebrate the holiday by raising a glass of Witch's Wit to celebrate Lost Abbey's move to remove the burning witch from its label.