Shut up! Thats what Republican National Committee chairman Michael Steele said this morning to unnamed GOPers who whisper in the shadows about preventing Sarah Palin from becoming the partys presidential nominee in 2010.

Some establishment Republicans apparently believe a Palin run would be a gift for Barack Obama, if he decides to seek another term. 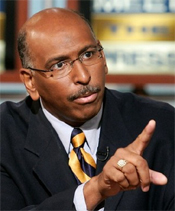 Steeles advice applies equally to pundits and consultants who have diminished political service by making it such a blood-sport. It dovetails nicely with Saturdays Rally to Restore Sanity And/Or Fear presented by Jon Stewart and Stephen Colbert. Stewart nailed it when he said, If we amplify everything, we hear nothing.

Everything political these days is amped to the max. Lets get through tomorrows election before we start hyping the dangers of a Palin Presidential run. The reality: the world is not going to end if Sarah and Todd move into the White House. There wont be a mass migration from the U.S. to Canada or Mexico to protest a Palin Presidency.

Though Democrats may take a drubbing at the polls tomorrow, (Reuters is giving Republicans 231 of the 435 House seats) its not because President Obama is the worst leader in this countrys history. The Economist (Oct. 30) says rage directed at Mr. Obama is overdone. The President did not cause the national economic collapse and job slump and deserves credit for helping steer America in the right direction, according to the magazine.

The Economists Angry America editorial credits Obama for being right about the need for a big and immediate stimulus plan.


He has been right to resist, with minor exceptions, calls for a wave of protectionism. He is guilty of having no credible medium-term plan to reduce the deficit. But then nor do the Republicans; and it was they, after all, who oversaw the tax cuts, the entry into two wars and the financial collapse that are the source of most of Americas gigantic deficit.

In other policy areas, too, Mr Obama has got some big things right. He was correct to try to deal with a dreadful system that leaves tens of millions of Americans without access to health cover, though he should probably have postponed doing so until the economy had recovered. In foreign policy, he has made generally sensible decisions about Iraq and Afghanistan. Many of the people he has retained or put in place have done well, including his ex-rival, Hillary Clinton."

Now we hear Kentuckys Mitch McConnell, who has an outside shot of Majority Leader after tomorrows election, saying the GOPs goal is to make Obama a one-term president. That implies two more years of all-out partisan combat. The country deserves better.