Apple CEO Steve Jobs is an AlphaBoomer, yet you wont find his company advertising on CNBC's news programs because their audiences  like Steve  are a little long in the tooth.

To Apple, epitome of cool, Jobs and his contemporaries dont use Macs, iPods, iTunes, iPhones and iPads. But that assumption is simply iNuts. 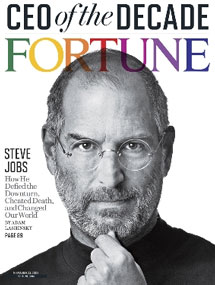 In singing the praises and promoting the buying clout of AlphaBoomers, NBC Universal is trying to update the mindset of modern marketing. AlphaBoomers are aged 55 to 64 (Jobs is 55).

NBCU research and media development president Allen Wurtzel gave a presentation to marketers and ad agencies yesterday in which he presented AlphaBoomers as the new 18-to-34 demographic. That younger demo is the Holy Grail for U.S. marketers. They drool over hipsters, especially under age 25, with the idea of building long-term brand loyalty. Marketers are missing out.

Wurtzel's numbers show AlphaBoomers have median household incomes of $69K, two and a half times more than homes of people under 25. AlphaBoomers use broadband at a similar rate than people 18-to-34 do, and spend more on appliances, furnishings, cosmetics/beauty products and dining than the 18-to-49 category

The 35M AlphaBoomers are a $2T market that is going untapped. They are the fastest growing demo group. An AlphaBoomer is born every seven seconds, a pretty scary stat.

Nielsen developed its demo groups about 50 years ago, eons ago from todays fast-paced media world. Its time for a major overhaul. A safe bet: Nielsen will see the light and some day go even further with demographics for the soon-to-be burgeoning and lucrative 64-to-72 market.