Today as President Obama invited Congressional leaders to the White House on Nov 18 for a chat on the economy and taxes, Senate Minority Leader Mitch McConnell threw hunks of red meat to the Heritage Foundation, assuring its supporters that there is no way the GOP is going to take up the president on his offer to tweak the healthcare law, which is the center of his Administrations achievements. 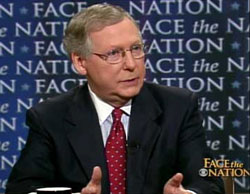 After acknowledging the power of the presidential veto, McConnell laid out a scenario of endless confrontation with Democrats. On healthcare, he said we can and should propose and vote on straight repeal, repeatedly. He urged Republican Congressmen to deny funds for implementation of the healthcare law and GOP Senators to push for votes against its most egregious provisions.

He wants outside groups like Heritage to continue educating the public about the ill effects of this bill on individuals your and old, families and small businesses.

It would be a perpetual political campaign.

With Obama in office for two more years, McConnell says the GOP may neither win straight repeal of healthcare nor every vote against certain provisions, but we can compel Administration officials to attempt to defend this indefensible heath spending and other government-driven measures like the stimulus and financial reforms.

McConnell warned against backdoor efforts of the White House to advance its agenda through regulation vs. legislation. He mentioned a potential new energy tax through the EPA, additional healthcare provisions via HHS, union-wanted card check through the National Labor Board and immigration reform via amnesty and selective enforcement of our laws.

Smart, aggressive oversight will keep the executive branch in check, according to Kentuckys Senior Senator. It will also mire Congress in gridlock until the 2012 election.

McConnell noted that some feel that it was indelicate for him to suggest that the GOPs priority is to get rid of Obama. He doesn't lose any sleep over critics. He said:


But the fact is, if our primary legislative goals are to repeal and replace the health spending bill; to end the bailouts; cut spending; and shrink the size and scope of government, the only way to do all these things is to put someone in the White House who wont veto any of these things.

We can hope the President will start listening to the electorate after Tuesdays election. But we cant plan on it. And it would be foolish to expect that Republicans will be able to completely reverse the damage Democrats have done as long as a Democrat holds the veto plan.

I think Mitch should skip the Nov. 18 session with the president.