PRSA/West Michigan chapter president Robin Luymes of Davenport University has yet to tell us the verdict reached by the chapter board at its meeting Nov. 3 that included consideration of a complaint by us.

But Twitter postings by board member and Assembly delegate Derek DeVries indicate the board did not take our charges seriously. 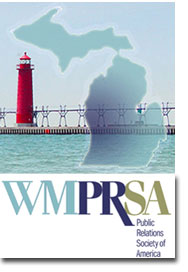 We had asked the board to reject charges by DeVries that we had lost touch with reality (like John Nash as portrayed in A Beautiful Mind), and that we were a legendary curmudgeon, or had inaccurately described a Flash Mob of delegates that attacked us, or that we were occasionally misguided.

We also asked it to recognize that the ODwyer Co. has five excellent products that are in competition with Society products.

One participant in the DeVries Twitter space said he was trying not to laugh about the Flash Mob story, but it IS quite funny, adding the question: Is the trial as serious as it sounds?

DeVries replied: Nopehe asked us to discuss the conduct of WMPRSAs delegates (i.e., me) and we did. He also demanded we endorse/promote his products.

Responding on the DeVries site was Prof. Tim Penning of Grand Valley State University, who said our e-mails to him and other chapter members were our MOharassment.

This is odd because Penning, in a nearly full page in the September 2008 Tactics of the Society, (link, sub req'd) waxed eloquent about the need for PR pros to listen as well as communicate to their publics, saying they should seek opposing views for the good of the public. Quoted were John Milton, John Stuart Mill, Alexis de Tocqueville, Scott Cutlip, Allen Center and Glen Broom, and James and Larissa Grunig.

Our reply from Penning, which was more than a year ago, was that he was bogged down with 18-hour days and had no time for what he felt were our lengthy dispatches to him.

Below is our e-mail today to Luymes, DeVries, Penning, Art Stevens (who witnessed the Flash Mob attack on us), as well as incoming chair Gerard Corbett and others.

I see from your postings on Twitter that the West Michigan board discussed my complaint and request for a truthful description of O'Dwyer products at the meeting Wednesday night but I have heard nothing.

If you're going to take orders from VP-PR Art Yann, you are forbidden to talk to me or deal with me (or any reporters) when speaking for or about the Society without the permission of Art or someone in his dept.

Not even chair McCormick can give such permission.

You continue your mocking, ridiculing tone towards me although DeVries and nearly 20 other "goofball" delegates were brutish and rude enough Oct. 16 to barge into an interview I was trying to conduct with Art Stevens on the floor of the Assembly. He had just lost a vote after five months of arduous work that brought 450 signatures in support of the Committee for a Democratic PRSA. I suppose that's another joke to you.

Now you are accusing me of "harassment" when I try to get you to make an apology and withdraw all the lies that are constantly told about me and O'Dwyer products by Society leaders and staff.

It's incredible that such names and brands as the Ford Library, Amway, Herman Miller, Lambert Edwards and Davenport University are consorting with self-styled "goofballs" with no manners. You are dragging their names through the Society mud.

The Society won't let us advertise because it knows our five products are better than anything it has. This is typical business cut-throat competition but has no place in a "professional" association that pays no taxes except on unrelated business income. The Society is not supposed to be in competition with anyone.

Our five excellent products are our website, 23-year-old monthly magazine (bigger in each issue than Strategist); Dir. of 1,700 PR firms; Dir. of 1,000 PR products and services, and our weekly NL.

Society members are cutting off their noses to spite their faces by avoiding these products especially since 2009 chair Mike Cherenson said PR pros today need every scrap of information they can get on PR.

There was nothing funny about interrupting a reporter doing an interview; forbidding a reporter from taping the crucial debate on APR and the discussion on the meaning of PR; blocking my son who could have helped in the note-taking, forbidding pictures; blocking me from attending the Assembly lunch when I needed to interview delegates on the APR vote, and a delegate verbally assaulting me in front of the hotel and in front of a doorman.

Your only take on this is you think this is stuff for ridicule. Ridicule and anything ad-hominem would not be allowed in a formal debate.