A modest proposal for News Corp CEO Rupert Murdoch: hire MSNBC's Keith Olbermann for a slot on Fox News. Now that would be a ringing affirmation of the network's fair and balanced tag. [Full Disclosure: I am a big fan of Keith.] 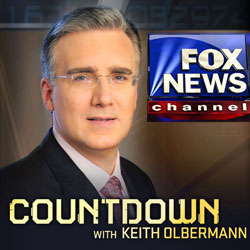 Olbermann was suspended indefinitely today for donating $2,400 each to three Democratic candidates. That's right. The same liberal Olbermann who spews against the GOP at every opportunity he gets on "Countdown with Keith Olbermann gave money to Democrats. MSNBC president Phil Griffin, doing his reprise of Casablanca's Captain Renault who was shocked to find that gambling is going on at Rick's place, is shocked that Keith gave money to Dems.

Murdoch is certainly befuddled by NBC's policy. He has no problem furthering the goals of the GOP. News Corp donated $1M each to the Republican Governors Assn., which is currently chaired by potential Presidential candidate Haley Barbour, and to the Chamber of Commerce, which deserves some credit for driving the Dems to a crushing defeat on Tuesday.

The same Murdoch tells the Australian Financial Review that Obama fails to listen to advisors or the business community. Obamas trouble is that he thinks he can make a great speech  he's a great speaker  and it will be done. But nothing gets done," Murdoch said if Republicans find a credible opponent, Obama would find it "impossible to win.

Fox News is serving as a halfway house to three perhaps credible opponents (Sarah Palin, Mike Huckabee and Newt Gingrich) plus a long-shot Rick Santorum. Murdoch built his worldwide empire by being an astute political animal. No doubt, he admires but doesnt agree with Olbermanns lefty views. Murdoch would appreciate Olbermann mixing it up with the rest of the Fox gang.

MSNBC, of course, could come to its senses and lift the silly ban on Olbermann, who is paid to pontificate, not report the news. Keith might find it a tad awkward to hang his hat at Fox, home of Bill-O and Glenn Beck. On the other hand, Olbermann announced earlier this week that he was dropping his Worst Person in the World skit on the show, which regularly bestows its award on Bill OReilly.

Swoop in Rupe, before Keiths loyal fans press for his reinstatement at MSNBC.