Hurry home, Barack. While you are communing with the spirit of one of your all-time faves, Mahatma Gandhi, in India, your presidency is getting shellacked, the word you used to describe the Democratic massacre on Nov. 2.

Forget about right-wingers like always angry Mitch McConnell of Kentucky or his soon-to-be Tea Party partner Rand Paul. It is friends who are doing the shellacking. 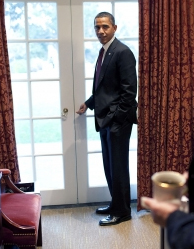 Did you catch lefty National Public Radio this morning? It turned upside down the premise of the India soireeU.S. jobs via increased exports to India. NPR reported one of the trips goals is to open investment in India to U.S. multinationals like General Electric. NPR acidly added that GE already employs many in India and more investment could mean more workers there than here. Ouch. And those low-wage Indian workers will make GE goods and market services that wind up where? No place less than the Grand Old USA.

By the way, who is the scheduling genius who determined that post-Election Day would be a swell time to hightail it out of D.C. for a ten-day romp through India, Indonesia, South Korea and Japan? While Democrats wail over their thumping at the polls, the President appears aloof and so distant from it all. The trip reinforces the charge that Obama is out-of-touch or positioned above the political fray.

Florida Democrat Alex Sink blames her razor-thin loss of the Sunshine State Governorship on a tone-deaf White House. She told Politico: They just need to be better listeners and be better at reaching out to people who are on the ground to hear about the realities of their policies as well as politics. She blames the Administration for botching the BP oil spill and failing to understand the political damage done by the healthcare reform.

Team Obama even got thumped in Michigan, which showed little electoral gratitude for the bail-out of Chrysler and General Motors.

The biggest blockbuster revelation was delivered by none other than Rupert Murdoch, chief of News Corp. Rupe told the Australian Financial Review that New York Mayor Mike Bloomberg confided in him that Obama is the most arrogant man that hes ever met, an impression Bloomie received after playing a round of golf with the Commander-in-Chief.

Billionaire Mike, who may have aspirations about the Presidency, is not exactly a man of the people. He is however an unvarnished straight-shooter which is something America desperately needs in the White House these troubled days.

No-drama Obama needs a dramatic PR makeover. Its time he puts the peoples agenda before his own.