Starbucks sparked a press release skirmish with partner Kraft after the market closed Nov. 4 when the coffee giant put out a brief statement via Business Wire and its website noting that it plans to end the two companies' lucrative distribution agreement.

Starbucks, which relies on Kraft to distribute its packaged coffee in places like grocery stores, also noted (somewhat ironically) that it does not intend to discuss any negotiations publicly. 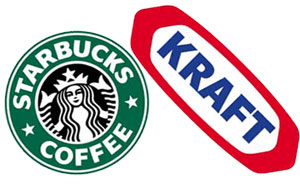 "Starbucks intends to keep the discussions with Kraft private and will not be providing further details or comments at this time," read the statement.

That notice sparked a testy rebuke from Kraft, which dispatched a retort via PR Newswire later that evening calling the pact "perpetual" and suggesting that it would cost Starbucks financially to nix the agreeemnt. Kraft also added that it won't discuss the matter publicly, while doing exactly that.

"Kraft Foods intends to keep the discussions with Starbucks private and will not be providing further details or comments at this time," read the statement from Kraft.

Kraft's volley was returned by Starbucks a few hours later -- around 10:30 p.m. -- expressing disappointment that Kraft "has chosen to make public statements" Starbucks said "mischaracterize" the deal between the companies.

"It has been, and continues to be, our intention to keep these conversations private," Starbucks said.

The Wall Street Journal reported that Starbucks' bagged coffee distributed by Kraft has grown to $500M in annual sales. The Journal also has some ideas about what's next for the two companies.