Shouldnt we be a tad concerned about the mystery missile launched last night off the coast of California?

The Internet today seems way more interested in the return of CoCo to the TV talk show circuit and Keith Olbermann's stout attack on MSNBC than a possible rogue missile. 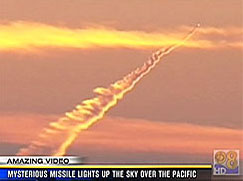 The Pentagon says it knows zip about the missile. Should'nt it?

Nobody within the Dept. of Defense that weve reached out to has been able to explain what this contrail is, where it came from, said Defense Dept. spokesperson Dave Lapan, according to the Associated Press. So far, weve come up empty with any explanation.

In a tribute to New York/Washington sportscaster Warner "Lets Go to the Videotape" Wolf, Defense experts are studying the video of the contrail shot by a KCBS (Los Angeles) helicopter. The egg-faced Pentagon, however, doesnt think the missile (or similar future launches) should get people worried.

That attitude brings back memory of George W. Bush (Did you watch the big guy last night?) in the aftermath of 9/11. Dont worry; keep shopping was advice from the former commander-in-chief.

Was the California blast tied to the reappearance of Dubya? Was it a book tour-related promotion, or a belated celebration of the Republican romp? Defeated California Governor candidate Meg Whitman may have had some spare cash on hand for a final party blast.

What if the missile was a special event brought to Americas shores by North Koreas Dear Leader Kim Jong-il, who would rather go out with a bang than turn the Hermit Kingdom over to clueless Junior. Or maybe, rapidly-arming China wants to send the U.S. a message that the Pacific Ocean is no longer an American lake. A Chinese sub accidently launching a missile, 35 miles north of Catalina Island, certainly would make a statement.

Terrorism (Mexican drug lords) must always be included in the missile scenario. The unexplained firing comes a day after Dept. of Homeland Security Secretary Janet Napolitano released a statement to announce increased security measures taken in the aftermath of the cargo bomb threat that came out of Yemen last week. These security measures reflect our commitment to using current intelligence to stay ahead of the adversaries, she said.

Thats all well and good. Yet a missile fired off/from the coast of California draws blanks (at least officially) from the U.S. national security apparatus. Thats not a confidence-builder.

There may be a simple explanation for the mystery missile. Alien contact, anyone?

Whatever the final outcome, one must be concerned over the general lack of concern in the media over its firing.

Are we that numb?