Spam, the canned meat and pride of Hormel, got a huge PR platform when the U.S. Navy decided to drop a lot of it to the more than 4,000 people of the stricken Carnival Splendor cruise line who were adrift for four days. 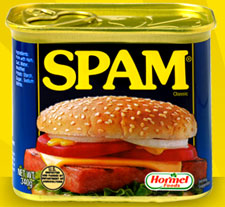 The delectable lunchable provided a lifeline to the passengers and crews. Alas, the ingrates on the boat dissed Spam, which they considered a far cry from the lavish buffets they had anticipated.

Coast Guard spokesman Patrick Montgomery conceded the croissants, crab meat, Pop Tarts and Spam delivered to the cruise ship did not exactly fit the "posh circumstances they went out there for." But how come nobody complained about the Pop Tarts?

The Associated Press reported that Sabrina Klinge texted her father to say she was living on Pop Tarts. He replied: "You mean they don't have steak and lobster on the Splendor. I thought you liked Spam."

Cheeky headlines in media such as The Telegraph covered the story with the headline "Spam boat' passengers tell of 'cruise from hell,'" while vendors hawked T-shirts, saying "I survived the 2010 Carnival Cruise Spamcation."

There's no word whether the Navy wants its Spam back.