President Obama is home after a ten-day Asian trip at which U.S. economic policy was trashed as nothing more than currency manipulation and South Korea said "no dice" on a free trade pact by failing to come through on market access for U.S. autos and beef.

The U.S got zilch support from allies. The trip was especially disheartening in the wake of the Nov. 2 elections. 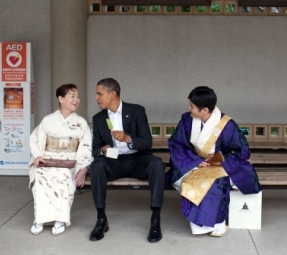 There have been many calls for Obama to step up in the leadership department. Bill Greider hit the nail on the head, writing that the president needs to drop the image as moderator for earnest policy discussions or national cheerleader for hope.

Please, get some backbone ASAP. Fight like House Speaker Nancy Pelosi who is determined to go toe to toe with the GOP on taxes and healthcare. The Compromiser-in-Chief, meanwhile, is already talking about a tax deal with Republicans and willingness to tweak his major accomplishment, healthcare. Note to Obama: The party of "Hell No" is now emboldened as the party of "Hell, Hell, No!" The GOP wants to run you out of town, not compromise with you.

What does the clueless White House do today? It emails a snapshot of the day, featuring the president taking a green tea ice cream break with two women during his visit to the Great Buddha of Kamakura at the Kotoku-in Temple in Kamakura, Japan. Geez, how weak.

Obama may have enjoyed the ice cream, but he appears so far away from the economic tumult that he promised to address in Asia. Can you imagine the hard-nosed Nixon White House or image-conscious Reagan White House having their guy sit on a bench, ice cream pop in hand and chatting up two Japanese women? Can you imagine Obama tormenter-in-chief Mitch McConnell in a green tea ice cream shot?

No way. At the very least, Mitch wouldnt be caught dead licking a green tea treat. That's too elitist, or non-American for Mitch. He would demand a plain old vanilla cone from the great USofA.

If the White House felt the need for a "taking a break" shot, it should be shown Obama rampaging through supermarkets in Seoul, shouting, "Hey Korea, Where's the American beef!"

Guess that would have been a big stretch for Too Cool Barry.