Like Rodney Dangerfield, the War of 1812 gets little respect in American history books. Thats too bad. 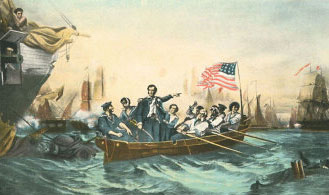 The lively conflict featured the torching of Washington, capture of Detroit, an epic Lake Erie naval battle in which a dying American Captain James Lawrence of the Chesapeake urged his men, Dont Give Up the Ship, writing of The Star-Spangled Banner during the bombing of Fort McHenry in Baltimore, Old Ironsides pounding the British fleet and the post-peace treaty Battle of New Orleans that paved the way to the White House for Andrew Jackson. Thats all pretty nifty stuff.

Its a shame that as the 200th anniversary of the war approaches, there are no federal plans to commemorate it. Give Maryland Senator Ben Cardin points for trying. On March 3, 2009, he introduced a bill to establish The Star-Spangled Banner and War of 1812 Bicentennial Commission "to encourage, plan, develop, coordinate and execute programs, observances and activities commemorating the historic events that preceded and are associated with the War of 1812."

Beyond the benefits of teaching Americans about an important part of their history, Cardin saw an opportunity to assist in the appropriate development of heritage tourism and the economic benefits to the U.S. Cardins bill didnt make it.

The Empire State also dissed the War of 1812. Outgoing New York State Governor David Paterson vetoed the War of 1812 Bicentennial Celebration Commission to save a whopping $2.25M. The commission was to promote sites upstate like Old Fort Niagara, which was captured by the British, Lake Champlain and Plattsburgh. Those places certainly could use the tourism dollars.

Canada, on the other hand, is spending heavily to promote the bicentennial of a war that helped establish its national identify.

The great state of Maryland is tops when it comes to gearing up for the War of 1812. The Old Line State already has cars sporting commemorative license plates to "commemorate the states history and unique contributions to the defense and heritage of the nation, including the pivotal clash that ensured American victory, an iconic flag, and our national anthem, The Star-Spangled Banner."

Heres an idea: Marylanders with 1812 plates should drive around D.C. when the new Congress gets to town in January to show support for a national 1812 commission.

Call it gridlock lobbying Honoring Americas heritage by commemorating the War of 1812 would be a great way for the Republican-controlled Congress to kick off a new year that promises much bitterness and division.