Heres a bit of good news from the Transportation Security Administration: body cavity searches are not in the cards.

As the nation gripes about aggressive airport pat-downs and embarrassing full body scans, TSA Administrator John Pistole (pictured) told reporters today at a Christian Science Monitor breakfast meeting that there are no plans for body cavity searches. A sigh of relief rose from the audience. 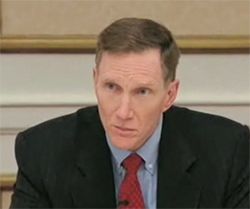 The media though are delighting over reports of kids and nuns being groped by screeners. Slow news week, indeed?

It didnt have to be. The TSA did a lousy PR job in informing airline passengers about impending aggressive security measures, which are a response to last years attempted Christmas Day bombing of a plane over Detroit. The Administration should have kicked off a national educational campaign to warn travelers of the prospect of pat-downs well before the full body scanners went into widespread use.

Bankrolled by federal stimulus money, the scanners are now in place at 68 airports up from 19 in January. Many more are coming.

Pistole is all over the media map these days, explaining the need for security. While he admitted that pat-downs and scans are uncomfortable and invasive, he calls them necessary security measures.

On CNNs State of the Union, Pistole said: If we are to detect terrorists, who have again proven innovative and creative in their design and implementation of bombs that are going to blow up airplanes and kill people, then we have to do something that prevents that.

The administrator also says a tiny handful of the traveling public get the pat-down treatment. Thats not what we see on TV.

As for the scanners that produce a naked image, Pistole should have made the PR pitch that screeners reviewing the image sit at another location. They see neither the face of the person being screened nor are told of his/her identity.

Pistoles media tour is welcome, but it should have happened months ago to avoid the perfect storm of holiday travel and widespread screening.

Pistole and his people now face National Opt-Out Day on Wednesday, the busiest travel day of the year. Organizers want people to opt-out of electronic scanning, and force TSA staffers to do thousands of pat-downs. They want those pat-downs in public, not in back rooms That promises chaos at airports across the U.S. That chaos could have been prevented with a healthy dose of PR.