More than 900 attended the dinner, which was chaired by Sir Howard Stringer, chairman and CEO of Sony Corp. Host was Tom Brokaw of NBC News, substituting for Brian Williams, who was on assignment covering the incident in Korea.

Paul Steiger, CPJ chairman the past several years whose term is up at the end of this year, described the battle for press freedoms throughout the world. 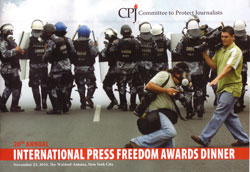 Steiger, managing editor of the Wall Street Journal from 1991-2007, now is chairman and editor-in-chief of ProPublica, mostly funded by an $8 million grant from the Sandler Foundation.

Joel Simon, CPJ executive director, said journalists honored at the dinner embody the struggle to report the news without fear of reprisal. Their work defies censorship. Their courage is a shield for many journalists asking questions and exposing uncomfortable truths, even at personal risk.

The event included the premiere of a video on the massacre of 57 people including 32 journalists and their assistants in the Philippines last November.

CPJ called it a shocking act of political violence.

The group is working with Philippines journalists and providing financial assistance to the families of the victims as part of its Global Campaign Against Impunity, supported by the John S. and James L. Knight Foundation.

A total of 840 journalists have been killed since 1992, most of them hunted down and murdered. Killed thus far this year have been 39.

Investigations of such murders are rare.

CPJ helps the families of the deceased journalists as well as families of journalists who have been jailed, hit with lawsuits, exiled, and otherwise harassed while performing their jobs.

CPJs latest financial report, for fiscal 2008 (PDF), showed net assets fell to $10.4M from $14.6M, mostly due to a $4M book loss in stock market investments. The group said that the rise in the stock market restored most of that value.

Unable to attend the dinner was award winner Mohammad Davari, who is imprisoned in Iran for having reported on alleged rape, torture and abuse at the now-closed Kharizak Detention Center.

The petition will be promoted online in advance of International Human Rights Day Dec. 10.