Wendell Potter, author of "Deadly Spin," which charges that improper PR tactics are a factor in deaths of Americans, is asking PR leaders to help him in seeking enforcement of PR ethics.

Potter, former chief spokesperson for Cigna, noted in his blog Nov. 28 that he has been a member of PR Society of America 30 years and is also accredited. 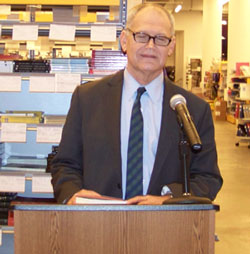 He wants PR leaders to join him in finding ways to strengthen and enforce the Code of Ethics of the Society. He notes that the Code says PR pros must be honest and accurate in all communications and avoid deceptive practices and reveal the sponsors for causes and interests represented. He said this would include fake grassroots, flogs or front groups.

Society members, he says, are supposed to decline representation of clients or organizations that urge or require actions contrary to the Code.


PR Is a Shunned Title

Only a handful of PR pros use PR in their titles these days because PR itself has a PR problem, said Potter.

Thats a shame because PR is not inherently evil or manipulative as I wrote in the book, he adds. He says PR has and is being used to good ends.

Even the noblest of causes can benefit from the services of a communications expert to clarify facts, disseminate information, and counter unfair arguments, he said.

His book had this paragraph:


With PR so intricately woven into every major industry and movement in todays mass media reality, the stakes of spin have become incredibly high,

And ethics do slip. PR often crosses the line into misleading, withholding, or simply lying. And when it does, society sufferssometimes tragically so.

PRSA Avoids Enforcement
The PR Society ended enforcement in 2000 and this year pulled the word violation three times from its bylaws so no one would expect PRSA to prosecute a member for misbehavior.

James Lukaszewski, of the Society Ethics Board, said in a white paper on the Society site (DOC) that the group has never been successful at sanctioning members. Virtually all such attempts have been successfully disputed, dismissed or discarded.

Members often quit when faced with charges, he noted.

Once again, we hear calls for punishment of others as a way of enhancing or endearing our profession to members, he wrote. The question is, how does punishing someone else ennoble, enhance or maintain our Societys reputation, or for that matter, enhance ethical practice?

Those who want the Society to enforce ethics say that the targets of ethical probes should be corporations or organizations since PR people
practice corporately.

Basically all PR people practice under the protection of a corporation which should be held responsible, say those who favor enforcement.
If an organizations behavior was criticized, there would be no need to seek out and prosecute a Society member who would be charged with offenses, they said.