President Obama today scored a major victory as the Senate passed the biggest food safety law in more than 70 years.

The measure promises to cut the more than $150B cost generated by food-related illnesses.

There is more good news on the political front. The long-awaited report from the Pentagon on dont ask, dont tell finds the vast majority of soldiers, sailors, airmen and marines simply don't give a fig about whether someone is gay or not. Job performance is Priority One. 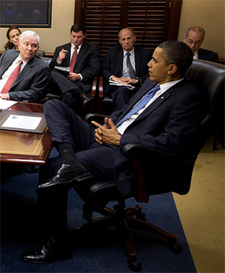 Republican blowhards like John McCain, who had been eagerly waiting for the Pentagon study, now say the survey was flawed. Big John is so out-of-touch.

The American public is lined up with the president on taxes and unemployment benefits. An Associated Press/CNBC poll finds that most people oppose extending the Bush tax cuts to the richest two percent of Americans. Half want to extend the cuts to those families earning less than $250K, while 14 percent say the cuts should be dropped outright.

Only 34 percent support the cuts one and all position of soon-to-be House Speaker John Boehner and Senate Minority Leader Mitch McConnell, who also scoffs at Sen. Chuck Schumers idea of a limited the tax increase to those making more than $1M. Just how many millionaires are there in Kentucky, Mitch?

Another poll from Gallup finds solid support for extension of benefits for the four million unemployed. Nearly half (48 percent) consider it very important to extend benefits for the long-term unemployed and 28 percent say its somewhat important.

Various Republicans have belittled the unemployed as slugs or economic parasites. Thats just a tired old page out of Ronald Reagans welfare queen playbook, his term to demonize those on public assistance.

Obama also should be buoyed by news that the cost of the political hot potato, Troubled Asset Relief Program, is far less than once expected. The Congressional Budget Office finds that the bulk of the $700B TARP plan, which was put into motion by President Bush, has been repaid. There is only $25B outstanding, largely in unrecovered moneyso far-from General Motors, Chrysler and American International Group.

Each has vowed to pay up.

Predictably, Rupert Murdochs Wall Street Journal, which becomes more anti-Obama by the hour, buried the CBO report. It ran five Associated Press paragraphs about it and stuck it as an item in the "U.S. Watch" section.

These developments are good news for Obama only if he can gin up some PR to make his case. Obama took one on the lip in a five-on-five basketball game over the Thanksgiving weekend. Its time for the President to develop some sharp elbows of his own.