Bill Gates, the non-college grad billionaire founder of Microsoft, has shaken up the educational establishment by saying there is no correlation between seniority and M.A.'s and quality of teaching.

Gates, who has spent billions on educational reform, told the Council of Chief State School Officers to stop linking teacher pay hikes to seniority and master's degrees because they are unrelated to teachers' ability to raise student achievement.

He is now spending $335 million on teacher-evaluation systems. 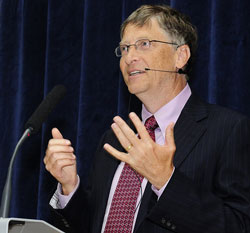 About half the teachers in his home state of Washington have M.A.s and this costs the state $300M a year, he said. The annual price tag nationwide is $9 billion, he added. Another $50B yearly pays for seniority-based annual hikes. Annual spending on public education is $500B.

Severe budget problems are forcing school systems to study costs and should help curtail raises based on seniority and M.A.s, said Gates. He asked: Is there any other part of the economy where someone says, Hey, how long have you been mowing lawns?...I want to pay you more for that reason alone.

The issue is relevant in PR where practitioners are being urged to get M.A.s if they want to advance their careers.

Recent grads and PR majors still in school ask us, Should I seek an M.A. in PR or communications?

The short answer is No. Credentials are apt to carry more weight in corporations and institutions where the main audiences are related to the company and include employees, customers, suppliers, stockholders, local communities, and retireds.

Corporate focus has also switched heavily to legislative goals at the national and state levels.

Agencies, which have mostly taken over the public discussion and press relations parts of PR, look for creativity, writing ability and personal sales skills.

Teachers in many states are required to get M.A.s if they expect raises or even to keep their jobs.

A close relative who is a lifelong teacher said only two of 11 courses taken for an M.A. were of much use.

Academics are riding high at PR Society of America where they led the fight at the Assembly to block any non-APRs on the board. This condemns the group to an undemocratic setup for an indefinite future.

Academics put a high value on degrees, certificates, diplomas and credentials of almost any type.


NEA Is in Orbit about Gates

The NEA, the largest teachers union, is in orbit over Gates remarks (webcast).

Bill Raabe, director of collective bargaining, disputed Gates, saying experience makes a difference in student achievementteachers get better, and that additional training improves content knowledge and should be compensated.

Grants election to a second straight two-year term as a director is an example not only of the power of academics in the Society but cronyism and defiance of Society tradition.

For its first 52 years, no PRSA director or officer returned to the board. Directors may not succeed themselves, said the bylaws. This rule was meant to stop the formation of ruling cliques.

Grant, who ran for treasurer this year, was defeated for that post by Phil Tate (who succeeded his own self, another record).

Instead of leaving the board as tradition would insist, Grant simply moved his candidacy to Mid-Atlantic director, bumping Linda Burkley of Harrisburg.

No doubt the ruling clique has Grant in mind for treasurer when Tate steps up to chair-elect.

Grant can thus be on the board for another five years or a total of nine altogether.


NEA Will Hold its Nose

NEA, which perceives Grants role in PRS as both good PR and good politics, will ignore such Society abuses as its undemocratic governance structure, its anti-press policies, and its withholding of vital information to members.

There actually is no national list of delegates since the list is on a voluntary basis. Delegates themselves dont get to see whatever names are on the list until about two weeks before the Assembly. If they want the list, they are forced to sign a promise of confidentiality before receiving it.

Society press policies sank to a new low at the 2010 conference. Three ODwyer staffers were blocked from covering it unless registration fees totaling $3,825 were paid.

VP-PR Arthur Yann e-mailed a member Aug. 20 that ODwyer staffers had to pay because the ODwyer Newsletter attended last years conference but never wrote about it. This was false because the Wendell Potter/Arianna Huffington session was covered extensively by this website (link, sub req'd).

Free admittance was given to reporters for PR News and PR Newser but denied to ODwyer staffers.

Not only was this reporter blocked from recording or taking pictures at the Assembly for the first time, but a delegate shouted a string of obscenities at us. This was seen by a group of delegates including a national director, Yann said in an e-mail.

We described this incident to the Washington, D.C., police who asked us to come to police h.q. to file a report. A detective listened for about 15 minutes to the interferences with press coverage at the Assembly (including an attack by a Flash Mob of 20 delegates who pressed pens into our hand and fled) and a description of the verbal assault.

He consulted the law and said that while verbal assault is a crime in nearby Maryland and New York, an assault victim has to be touched in some way by an assailant in D.C. for a crime to be committed.

The just-published minutes of the Assembly do not give the totals of the ballots that were flashed on screens as required by Roberts on page 453: When a count has been ordered or the vote is by ballot, the number of votes on each side should be entered (in the minutes).
Members are also supposed to correct false statements promptly, according to the PRS Code.

The Societys Business Case for PR says that The industry continues to suffer criticism at the hands of individuals who do not understand the practice and application of PR.

This statement must be removed because criticism and documentation of certain abuses in PR are being publicized throughout the U.S. by Wendell Potter, author of Deadly Spin, a 20-year senior PR executive at Cigna and other companies, and a longtime member of PRS. He understands the practice and application of PR as well as anyone.

His specific set of facts, especially about front groups, need to be addressed by the Society.

PR firms are not apt to reveal their clients but companies could reveal the influential groups they support in D.C. and elsewhere. Such groups file IRS 990 forms but sources of funds dont have to be revealed on the forms.