Secretary of State Hillary Clinton is singing the blues these days over the massive WikiLeaks document dump that has her scrambling far and wide to assure allies and rivals worldwide that the U.S. really thinks they are worthy friends and adversaries.

[Note to Canada: A vast majority of Americans don't think you have a "chip on your shoulder" or have declined from a "middle power" to "an active observer" of global affairs. In her younger days, my daughter lovingly referred to you as "America's hat."] 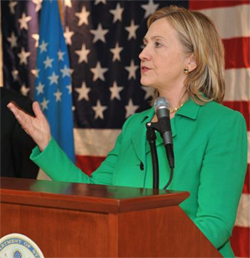 It must have been tough for Clinton to chat last week with Russian President Dmitry Medvedev after news broke that U.S. diplomats branded him a "comic book character." And what about Kazakhstan strong man, Nursultan Nazarbayev, host of the Organization for Security and Cooperation in Europe conference that Clinton attended? WikiLeaks says U.S. cables dismiss Nazarbayev as a "practiced liar."

BDA is claiming "Mission Accomplished." It believes Americas image overseas, which tanked in the aftermath of George Bushs wrong-headed invasion of Iraq, is on the upswing. "Our research has shown a clear shift toward more positive perceptions of America and its leadership role in the world. This makes our mission a less urgent priority for U.S. corporations who have joined and supported our initiatives," says Reinhard.

He believes U.S. multinationals have now integrated "best practices public diplomacy" into their day-to-day operations. BDA representatives made hundreds of speeches to business, civic and academic groups and gave interviews with national and foreign press. Reinhard, who is chairman emeritus of DDB Worldwide, testified in Congress and served on advisory committees of the State Dept. and Dept. of Homeland Security.

In the wake of the WikiLeaks fall-out and the mid-term election of a more isolationist Congress, BDA should stick around for a bit. Its mission is now unaccomplished. WikiLeaks, which Germanys December 6 Der Spiegel modestly called the biggest indiscretion in the history of diplomacy, certainly dealt a blow to Americas image abroad.

As Nile Gardiner D.C. correspondent for Britains Telgraph put it on Dec. 5: "America's international diplomacy has taken a massive hit in the past few days, which may take many years as well as new leadership in the White House to fully repair." Gardiner believes WikiLeaks "will make the Secretary of States job far harder now, and will be a huge drain on the energy of the former Senator of New York."

Stick around, Keith. Hillary and gang need you. There is serious damage control work to be done.