WikiLeaks has sparked a global debate about privacy, journalism and disclosure, and is making more than a few corporate communications departments nervous. So what do some of PR's big thinkers see in the ordeal? 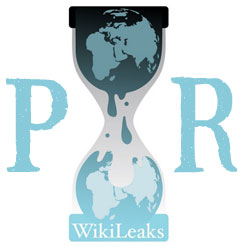 "...what happens if some bright enterprising, anti-business student decides to follow suit by creating a WikiLeaks-type website aimed at business? Or more specifically, at public relations agencies? Or even more specifically Middleberg Communications?"

The idea of a website for PR document leaks would cause more than a few coronaries around the industry, but PR pitches leak all the time and a few sites based on corporate rumors and secrets have come and gone (anyone remember F*ckedCompany.com?) without large-scale impact.

But Middleberg says that WikiLeaks' playbook is "not only wrong; it is dangerous and must be stopped."

Crisis counseler (and lawyer) Richard Levick of Levick Strategic Communications declared that in the wake of WikiLeaks "the era of clandestine communications has officially come to an end."

Levick said that emails, memos, even Post-It notes, can now become headlines and "everything is discoverable."

As MSLGroup senior VP David Chamberlin told Fast Company magazine, "No matter what you make, sell or serve, your organization is a potential target for data theft that can place all your valuable relationships at risk."

NextFifteen CEO Tim Dyson, while sympathetic to disclosure of unlawful or irresponsible acts, is also critical of Assange's M.O.


"Corruption and other unlawful acts should be named and the people responsible shamed. But simply revealing secrets because they are a) interesting and b) secret isnt a great argument. Id like to see WikiLeaks survive this storm but Id also like to see it act more responsibly."

But looking outside of the business prism, what about the ethics of Assange's disclosures?

Ruder Finn's ethics chief Emmanuel Tchividjian takes a swipe at the condundrum from three points of view -- the leaker, Assange, and the mainstream media publishing the cables.

Tchividjian sees a clear legal case against the leaker, but the government's desire to shutter site is ethically less transparent.

He doesn't have a problem with media publishing the documents, since they were mostly public already via the WikiLeaks site. But he wonders if the cables show a need for ethical guidelines in diplomacy.