PR students and recent grads need practical job advice. But from what they tell us and what we read in PR textbooks, theyre not getting it.

Rather, theyre getting a lot of abstract bafflegab and flapdoodle that will ill equip them to face the harsh realities of the marketplace.

Theyre being sent into battle armed with cardboard shields and papier mache swords.

Veteran writer and PR pro Jane Genova wrote a Dec. 7 column for odwyerpr.com that is worth a stack of textbooks and years of college PR courses.

She quotes an article on the Education Bubble that compares it to the real estate bubblean over-priced, over-hyped commodity fueled by excessive credit mostly underwritten by the government.

Genova says PR is an intensely practical and personal activity and that time in the trenches trumps anything that comes out of a book or instructor.

PR is like plumbing, sales and journalism, she writes.

This writers experience with PR is that if someone knows whats working, theyre going to keep it to themselves. Writers dont go around telling the competition how to pen good articles or novels.

Genova tells fledgling PR pros to knock on doors--cold call all the merchants and businesspeople in town and offer what they can do to publicize and promote their businesses.


Do Anything They Want

We would go a step further. Do anything they need including sweeping the floor and washing the windows. Do what the regular employees wont. Bring them news of new products or what the competition is doing. Show them how to create a website if they dont have one.

A local liquor store we know of markets an Australian wine nationally because he has bought a quantity of it and has the best price.

First client could be a restaurant. Many a PR person started out working for meals. Theres plenty to do starting with asking customers what they really think of the food. Theyre not apt to tell the owner.

Spy on all the other restaurants in town and see how your restaurant stacks up.

Pitch parties and special events to the businesses and associations in town.

Treat community and business leaders to dinner at the restaurant, building its reputation as a place to be seen. Join all civic and business groups.


Sonnenberg Should Be Studied 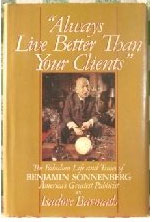 Sonnenberg, who became rich enough to fill a 12-story townhouse with valuable art objects, was a fountainhead of ideas. He would give as many as 100 to a client.

His goal was to get as close as possible to clientsbe the first person they saw in the morning and the last one they saw at night. He found out what was in their heart of hearts and worked on that. For well-off businesspeople, it wasnt more sales or profits. It might have been a son or daughter who couldnt get into college.

Do a favor for a clients child and youll never lose the account, he advised.

For many years he did the humblest of PR chores but eventually worked for many blue chip CEOs. The title of his book was the revenge he got for all those years of humiliation.


Students Not Told About Sonnenberg

We recently gave away ODwyers Directory of PR Firms to about 60 PR grads and undergrads in return for them telling us about their job-hunting experiences and how their educations suited them for that.

None ever heard of Sonnenberg nor did any teacher ever tell them to knock on doors and talk to proprietors. What they got was a lot of theory, process and methodology. They read a lot about how national PR crises were handled although such materials were readily available in the press.

What employers were interested in, they told us, was not what they majored in but how many PR internships they had served. Two were good but three were better. Only a small percentage of PR grads are going to get real jobs these days. The rest are going to have to fend for themselves. Whats ironic about this essay is that almost no PR professors would allow their students to see it.


Fiske a Study in Delusion and Ducking

Her remarks portend what her tenure will be likedelusionary and ducking.

She will pick and choose whom she lets interview her rather than facing the entire PR press at once. If she follows the practice of her predecessors, she will speak to a half dozen or fewer of the 110 chapters and this schedule will be a tightly guarded secret. Odds of her addressing the New York chapter are about zero.

Fiskes interview with PR Newser on Dec. 7 had her proclaiming the Societys interest in ethics and diversity, two areas it should be ashamed of.

Its unethical for PRS to espouse democracy in its Code and then block rank-and-file members from seeing the national list of delegates, knowing what they said, or knowing how they voted. Blocking full press coverage of the Assembly while espousing the free flow of accurate information is also unethical.

While professing to follow Roberts Rules, PRS breaks at least five of them including the rule that if there is an assembly like PRS has, it must sit over the board. Proxies were again used in 2010 although this mocks Roberts. This is a very small list of wrongful practices at PRS.

The Societys Code says Ethical practice is the most important obligation of a Society member.

Ethics or Ethical appears 11 times on the first page of the Code. The word politicsmeaning what faction has the most votes in the Assembly-- should be substituted for each of these.

Even worse is the Societys record on diversityonly two African-Americans on its board in 63 years. Ron Owens joined in 2006 for three years but quit after five months.

Rejected this year was African-American Regina Lewis, head of communications for the Potters House mega-church in Dallas, a 25-year member.

The at-large seat went instead to Susan Walton, associate teaching professor at Brigham Young and a member only since 2005. Lewis has a much bigger job.

Ofield Dukes, African-American and 2001 Gold Anvil winner, was rejected for the at-large seat in 2009.

PRSA last December closed the Multicultural Section after 26 years. Director Lynn Appelbaum said a survey of members found diversity was a very low priority with them. She noted the section was a money-loser since it only had 73 members, far below the 200 required.

Section members posted more than 20 complaints on Twitter. VP-PR Arthur Yann said remarks by one of the complainers were ignorant and irresponsible.

Section members were also angered that the decision to close was made without consulting them and just before Christmas when h.q. closed completely for an 11-day break. They found no one to talk to or take their e-mails.

Chair Gary McCormick promised a Strategic Planning Committee in 2009 that would have blacks and journalists on it. The board did not allow this.

Fiske should listen to 2011 board member Marisa Vallbona who said as a candidate that the Society is dominated by a specific type of member and I can count on two hands the number of Hispanic members Ive met in the past 20 years.