This blogger is a huge fan of former Vice President Al Gore, whose presidency was stolen by the Supreme Court ten years ago this month. That said: Gores pitch letter for his Repower America global warming/green energy group pokes a big finger into the eye of reality. 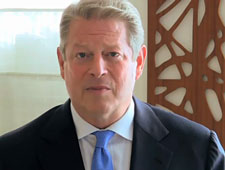 Everywhere, you look, momentum towards a clean energy future is building, writes Gore, who apparently didnt look at the results of the November election that sent pro-environmental Democrats packing. If presented on the floor of the coal-fueled 112th Congress, a national energy policy would be D.O.A.

The science of climate change is considered beyond dispute by all but a few scientists, governments and NGOs, according to Gore who fails to note that more and more hard-pressed Americans doubt that humans are responsible for warming. A Rasmussen poll released Dec. 10 shows 41 percent of respondents believe human activity is the cause of world heating, compared to 47 percent in April 2008.

Gore finds no relief from President Obama. Similar to the cave-in on taxes, the Obama Administration is delaying the implementation of new rules governing smog and toxic emissions from boilers, according to the front page of the Dec. 9 New York Times.

The move allows Bush Administration regulations to remain in place. Toughening those standards was a top priority of the Obama campaign, which now apparently will junk any position in order to remain in power. Frank ODonnell, president of Clean Air Watch, told the Times that Obama is in full re-election mode and is running scared from the incoming Congress.

Al does get one thing right. He says the fossil fuel industry executives aren't ready to change because they are in denial and dont let facts stand in their way. Gore letter shows that another guy is in denial.

Take a look in the mirror, Al.