The oh-so-smart U.K.-based Economist revealed how ignorant it is about U.S. PR in a 2,700-word article Dec. 16 under the headline, Rise of the image men; PR man has conquered the world. He still isnt satisfied.

The article falls on its face by repeatedly referring to PR men and PR man although the majority of PR pros today are women and the percentage is increasing. 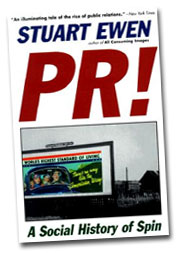 About half the article appears to be a re-write of material in "PR! A Social History of Spin," a 1996 book by Stuart Ewen, Hunter College professor of film and media studies.

Ewen wrote extensively about Ivy Lees role in helping to create the PR industry in the early 1900s. He noted that while Lee promised accurate information about clients answering all press questions most cheerfully, he did not always live up to such promises, earning the nickname, Poison Ivy.

Lee spread egregious lies about strikers against a Rockefeller mining company in 1914, says the Economist. Some striking miners and their families were killed in one confrontation. A Lee press release accused Mother Jones, an elderly union organizer, of being a prostitute and brothel-keeper.

The magazine says, PR Man remains uncertain of his proper role. Is he a master manipulator? Is he the devils advocate (as long as Satan pays his fees)? Or is he a benign bridge-builder between the corporate world and the public?

Current spiel of PR, says the magazine, is that the mainstream mediathe traditional gatekeepers of news and the bane of the PR mans lifeare becoming less important with the rise of social media.

It is not difficult to stick pins to the PR mens inflated hopes of being the lords of online chaos, it writes.

It concludes that SM fans as well as most powerful and influential people, still get their basic information from old-fashioned news providers.

The magazine on April 10 said Johnson & Johnsons handling of the Tylenol murders in 1982 and 1986 is the gold standard of crisis management although the company re-introduced easily-spiked capsules after seven people had been murdered with them. It pretended total lack of responsibility for this, offering a measly $100K reward for information about the murders.

J&J has refused to talk about the subject for at least a decade.

This website sent criticism of J&Js actions by PR professors and ex-employee Scott Bartz to Economist editors but they refused to budge on their praise of J&Js PR.

Gary McCormick, PR Society president, in a posting on the Societys website, said the magazines pessimistic assessment couldnt be further from the truth.

McCormick talked about the strong ethical standards of the Society although it removed any enforcement of its Code in 2000.

The German Council of PR issues public rebukes of PR professionals who dont live up to the Councils ethics code.

The Middle East PR Assn. this week fined Dubai-based d-PR 15,000 dirhams (about $4,000) for improperly editing a photograph in the groups annual awards banquet.

McCormick said PR is growing rapidly and in some ways, faster than its brethren, advertising and marketing.