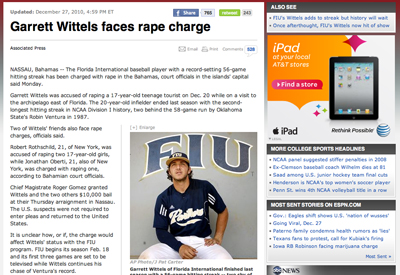 A major scandal broke during this holiday week concerning a Florida International University star athlete who has been accused of rape by two 17-year-old women.

Baseball slugger Garrett Wittels, 20, and two friends were arrested at the Atlantis Resort and Casino in Nassau where they were vacationing.

Authorities had speculated that a date rape drug was used in the Dec. 20 alleged attack, but investigators only found traces of alcohol and no drugs in blood samples from the two teenage girls involved. The young women, however, are charging that the sex was not consensual because they were under the influence of alcohol. The men admit to sex.

Video surveillance showed the two young women following the men to a private party where the incident allegedly took place.

The only person speaking to the press is Wittels' father, an orthopedist. He told The Miami Herald that his son would be vindicated. He said his son was "devastated" by the allegations.

Garrett Wittels has been billed as the next great Jewish baseball player and was compared to Sandy Koufax by the Jerusalem Post. His mother recently called him the "most spiritual... young athlete you'll ever meet."

In the Bahamas, the maximum penalty for a first-time rape offender is seven years.

Presumably the school will benefit from advice by Rosanna Fiske, an associate PR professor at FIU and who will take over as chair of the PR Society of America on Jan. 3.

It bills itself as the world's largest organization of PR professionals (21,000 members). It frequently says it provides ethical
leadership to the entire industry.


Recalls Duke Incident
The charges of men having sex with women against their wills recalls similar charges against members of the Duke University lacrosse team three years ago.

Charges brought against the Duke students were eventually dismissed but the story was covered extensively by the media for years. Although exonerated, several of the students left Duke and had their lives disrupted.

O'Dwyer's Editor Fraser P. Seitel faults Duke for jumping to conclusions about the guilt of its students before the facts were known. This left the school with "egg on its face -- not to mention law suits -- when the rape charges were dismissed," Seitel said.

FIU has mostly assumed a "no comment" policy on the story. The only school official speaking so far is athletic director Pete Garcia who said the department would have no comment. "We will continue to gather any possible information as it becomes available," Garcia said.