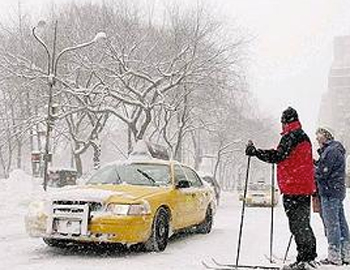 After two days of shoveling the results of the Great Blizzard of 2010, New Yorkers couldnt be blamed for dismissing global warming as nothing but bunk. At least thats what I was thinking until I picked up my Sunday New York Times after a backbreaking day of pushing more and more snow onto my unplowed Brooklyn street. [Note to Mayor Bloomberg: unpicked-up snow finished former Mayor John Lindsays quest for the Presidency. Get a shovel, Bloomie!]

The wicked east coast snowstorm was a direct result of global warming, according to commercial weather forecaster Judah Cohen, author of an outstanding op-ed piece in the Dec. 26 NYT.

Heres the nutshell: warming ocean temperatures that melt Arctic ice adds moisture to the atmosphere that falls as snow in chilly Siberia and the Himalayas. That high altitude snow creates wave energy, forcing a bend in the jet stream from west to east to west to north and south. And voila, the eastern U.S., northern Europe and eastern Asia get walloped with snow that traditionally falls elsewhere. Global warming, believes Cohen, is a snow job by nature. The reality is were freezing not in spite of climate change but because of it, he wrote.

Screwy weather stories abound. Under the weight of snow, the Metrodome collapses in Minneapolis. Blizzards deal a blow to European air travel. Four foot drifts nearly shut down hard as nails New York City. Cohens piece could not have been better timed.

Global warming deniers scoff at Cohen. They are correct when they say current weather has nothing to do with climate, which is a long-term trend. The United Nations World Meteorological Organization, however, predicts 2010 will rank among the top three warmest years since the beginning of climate records in 1850. It also says the current decade is the hottest ever.

Sounds like a trend, doesnt it? Cohens op-ed helps one make sense of the ridiculous amount of snow in New York. Fact is, winter has barely begun. 2011 looks like a big year for shovel makers. I have to leave early today. There is more shoveling to do.