When she lived in the White House, Nancy Reagan didn't enjoy very good PR. Her time in Washington is largely remembered for the much-ridiculed Just Say No anti-drug campaign, expensive china settings, designer gowns and a never-ending effort to defend Ronnie from all criticism.

To me, Nancy hit her stride following the 2004 death of her husband after a ten-year battle with Alzheimers disease. Despite heavy opposition from conservatives, Nancy became a powerful advocate for federal support of embryonic stem cell research, which may or may not ever result in a cure for Alzheimer's. She praised President Obama for repealing the eight-year policy limiting federal funding for research that was signed by President Bush II. 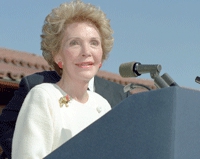 Reagan is just about the only Republican to have anything nice to say about the president.

A reputation rehab of the former First Lady's White House years is in the works. A PBS documentary slated to air Feb. 6, which is Reagans centennial, depicts Nancy as much more than glamour and glitz. The MacNeil/Lehrer Productions work positions her as one of the most influential First Ladies in modern times. Surprise, surprise. It gives Nancy credit for moderating Ronnies hard-line stance toward the Soviet Union (You remember his quip about bombing the Soviet Union? "My fellow Americans, I'm pleased to tell you today that I've signed legislation that will outlaw Russia forever. We begin bombing in five minutes," said Reagan during a sound-check prior to delivering his weekly Saturday radio address. The Soviet Far East Army was put on high alert after Reagan's "joke" become public.)

Nancy also is credited with saving the Reagan presidency by getting him to publicly admit his involvement in the Iran-Contra mess, which was not exactly Americas most shining moment.

The documentary features Judy Woodruff interviewing Nancy along with interviews with members of Reagans inner circle such as Jim Baker, ex-chief of staff; Stuart Spencer, political strategist, and Ken Duberstein, another politico. Reagans biographer Lou Cannon also is part of the show.

Nancy Reagan: The Role of a Lifetime promises compelling programming and may establish Nancys role as a major player on Americas political scene. One caveat: the show is funded by big-time Reagan supporters like The Annenberg Foundation, George Shultz, Alan Greenspan and wife Andrea Mitchell.

That said, Ill be watching and so should Michelle, whose husband could use some advice about toughening up.