Wendell Potter, author of "Deadly Spin," told a capacity crowd of 200 in New York last night that backers of a single-payer health plan must adopt the techniques and strategies of the opponents of such a plan.

Potter, speaking to Physicians for a National Health Programat the Murphy Institute for Education and Labor Studies, said the PNHP must seek allies, get others to tell their story, use appeals to basic emotions, and create memorable slogans.

Special interests have kicked your butt with the skillful use of language, he told the New York Metro chapter of PNHP. They have been able to demonize single-payer, he added.

Politicians, he said, are not going to support such a health plan unless their constituents are in favor of it, he said. He faulted the single-payers for lacking a long term strategic plan, something that he said the healthcare insurance industry excels at.

Opponents of single-pay engage in fear-mongering by calling it socialized medicine and asking why should the U.S. tinker with its health services when it has the best healthcare in the world?

False information is given about healthcare in Canada, he said.

As an example of the power of lobbyists, he cited the recent defeat of attempts to put a tax on sugared drinks.

Such a tax had been proposed in New York by Governor David Paterson when he was in office.

Pepsi, Coke and other groups such as the American Beverage Assn. lobbied heavily against such a tax and won, said Potter. 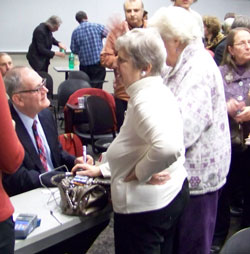 An early supporter of such a tax, State Senator Jeffrey Klein, flipped and essentially stopped the proposal in its tracks, Albany insiders said, according to a story in the March 26, 2010 Daily News.

The PNHP includes 14,000 physicians and 4,000 medical students and health professionals. It is on a nationwide campaign to create a single-payer, Medicare-for-all program as the only way to assure high quality, comprehensive care to all Americans and the only way to rein in skyrocketing healthcare costs.

Dr. Garrett Adams, president, said in a statement that the group rejects the move by Republican leaders to repeal the Patient Protection and Affordable Care Act.

He said the PNHP, based in Chicago, recognizes the new law is incapable of resolving our healthcare morass.

The law is flawed because it continues our nations reliance on an inefficient and wasteful private-insurance-based model of financing carea rickety structure that denies healthcare access to millions, bankrupts patients, ratchets up costs and frustrats efforts to improve quality, he said.

Adams estimates that Americans would save $400 billion annually by cutting out the unnecessary paperwork and bureaucracy inflicted on us by the private insurers.

Americans would also gain the one-system bargaining power we need to negotiate lower prices for pharmaceutical drugs and medical supplies, he added.

Potter said he was disappointed in the new healthcare law because it was not a single-payer plan and lacked the option of a government health plan for those who desired it (public option). But he said the flawed plan was better than no plan at all.