Sarah Palins eight-minute video dealing with the tragedy of the Jan. 8 slaughter in Tucson effectively kills any chance she had for the presidency. The piece shows just how out-of-touch Alaskas former half-term governor really is. 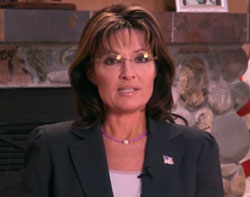 Shockingly, Palin uses the anti-Semitic blood libel term when accusing the media of scape-goating the vitriolic rhetoric of the right for the attempted assassination of Democratic Rep. Gabby Giffords. Palin brushes off the decision of her own political action committee to put Giffords congressional district in a gunsight.

In Palins fantasy world, after a campaign of mud-slinging political opponents join together for the common good. She should ask President Obama about that one.

She goes on to say heated political attacks are really nothing new, mentioning that discourse is a step up from challenging an opponent to a duel like in the days of old. Palin should give a read to Joanne Freemans When Congress was Armed and Dangerous op-ed in todays New York Times. Is Sarah recommending that Congress arm itself as it did from the 1830s to 1850s? Words are today's weapons of choice?

Hateful tauts meant to destroy a political rival are instantaneously carried across the globe via the 'Net and the social media world. Sarah, if anybody, knows the power of social media. She posted her eight-minute rant on her Facebook page. Sarah also is known as the queen of Twitter with more than 370K followers, including yours truly. More garbage.

As noted today by Glenn Kessler of the Washington Post, Palin took a quote from Republican hero Ronald Reagan out of context. Said Palin: President Reagan said, 'We must reject the idea that every time a law's broken, society is guilty rather than the lawbreaker. It is time to restore the American precept that each individual is accountable for his actions.

Reagan was referring to welfare, not "acts of monstrous criminality" like what happened in Arizona.

Palins Teflon coating is beginning to wear thin. Potential GOP presidential rival Tim Pawlenty took a shot at Sarah for the use of the gunsight piece.

Palins video is just another page out of the conservative playbook, falsely claiming victimhood against Big Media and Big Government. Tucson shows the emptiness of that strategy. Giffords and the six dead are the immediate victims of the Tucson shootings.

A Palin White House will be another one.