The same PR Society Assembly delegate who verbally assaulted this reporter and threatened physical harm while I was standing in front of the Washington Hilton Oct. 16, 2010, has sent me a letter saying he might beat you to a pulp.

Supposedly, I improperly embraced Society director Marisa Vallbona when she passed by me in the lobby of the hotel that morning.

If you had put your hands on my wife, or even dared to kiss herId beat you to a pulp, said the all caps anonymous letter.

This is not the husband of Vallbona since she is not married.

The Dec. 18 letter, with a Chicago postmark, added: Count your blessings. This delegate let you off with a few choice words. (indicating the sender of the letter is the same person who launched a string of obscenities at me in front of the hotel).

Rather than back down, I stood nose to nose with this man, who was about six feet and had short hair and a light complexion, and demanded his name. I also asked a nearby hotel doorman to call the police. With this, he retreated back through the door from whence he came.

Here is the text of the letter which was accompanied by a picture of me standing in front of Second District Police h.q. in D.C.:

YOU DUMBASS. THE GUY YELLED AT YOU, NOT US AS IN A MORE THAN ONE PERSON. YOURE PATHETIC AND YOURE LUCKY YOURE NOT BEING SUED FOR ASSULT, (sic) DUE TO YOUR GROSS CONTACT WITH HER.

IF YOU HAD PUT YOUR HANDS ON MY WIFE, OR EVEN DARED TO KISS HERID BEAT YOU TO A PULP. COUNT YOUR BLESSINGS THIS DELEGATE LET YOU OFF WITH A FEW CHOICE WORDS.

LOL, ATTACKED BY FLASHMOB? THOSE [pens] WERE GIVEN TO YOU AND THEY DID NOT FLEE. THEY WALKED AWAY.

LASTLY, YOUR PHOTO IS A JOKE. GROW UP YOU PANSY ALCOHOLIC!!


This writer often uses the editorial we because opinions expressed are not just those of an individual standing alone but opinions that have been run by other ODwyer writers and editors as well as contributing editors.

The reference to a Flash Mob is the 20 delegates who tried to place pens in our hand at the Assembly. They are just as cowardly as the author of the letter since they all walked rapidly away, refusing to talk to me or explain what was happening. A blog by one of them later explained I was being compared to John Nash of the movie, A Beautiful Mind. A schizophrenic, he was given pens by Princeton faculty members after he won a Nobel Prize. 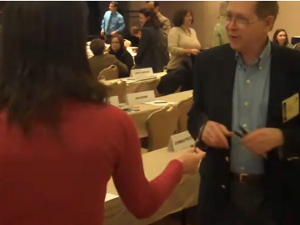 This Flash Mob was designed to go off at a certain time (2:45 p.m.), which happened to be in the middle of an interview I was trying to conduct with Art Stevens, a leader of the move to allow non-APRs to run for the board.

The Flash Mobsters were discourteous, thoughtless and rude. Members were all delegates, supposedly the crème-de-la-crème of the Society.

PRSA's VP-PR Art Yann then said in an e-mail to me that I was in an altercation with an Assembly delegate that was witnessed by other delegates and a national director and this was one more instance of bad behavior by me at the Assembly.

If that isnt spin, I dont know what is. Someone attacks me verbally and its an altercation that supposedly is just as much my fault.

Vallbona had indicated friendship and support of me for years, including lunching with me in 2006 when she was Universal Accreditation Board chair. When she passed right in front of me while I was seated in the hotel lobby, I popped up and lightly embraced her as a welcoming gesture. I attempted a kiss of her cheek but it may have just been an air-kiss.

It is common today for people to embrace friends since a handshake can be considered cold and formal. Leo Buscaglia, also known as Dr. Hug, urged this form of greeting and was known for physically embracing members of his audiences.

Up until that meeting in the hotel, I had no inkling that Vallbona was other than a fast friend. We had traded 48 e-mails in the previous three months including 23 from her to me.

She acknowledged that the refusal of Society staffers and leaders to deal with ODwyer reporters was frustrating but she was powerless to do anything about it. Vallbona published a comment on this website Oct. 26, 2010 that it was not appropriate to grab me and kiss me. That, Jack ODwyer, is grounds for assault and battery. But Im a Southern lady and dont raise a big issue over such things. And for the record, I did mind it and Im politely asking that you never do it again.

I doubt any such charges would hold up in any court. Rather, its a diversionary tactic to take attention from the real issuea delegate threatening me with physical harm.

The Societys vendetta against the ODwyer Co., forbidding any member of the staff from joining it or allowing any ads in Society media although the Society sold at least 50,000 copies of ODwyer articles without permission, has reached its lowest level ever.

A Society committee should look into these new black eyes that it is giving itselfthe threats of physical violence against this reporter and the Flash Mob that attacked me at the Assembly.

Vallbona should tell this delegate who threatens me with physical harm that I did nothing wrong to her.

The verbal attack on this reporter was but one of a string of actions designed to frustrate full coverage of a highly important Assemblyone that considered letting non-APRs on the board for the first time in 35 years.

Tens of thousands of words were put on a Society E-group arguing both sides of the issue. One delegate, Kathy Lewton, chimed in with more than 10,000 words. This was a key issue for the more than 80% of members who cannot run for national office.

For the first time ever, PRSA banned recording of the Assembly or taking pictures by reporters. This reporter, as usual the only reporter present, was banned from the Assembly lunch when I needed to interview delegates about the defeat of the APR proposal.

An attempt was made to charge three ODwyer reporters $3,825 to cover the 2010 conference while reporters for PR News and Mediabistro went free.

Allegedly, ODwyer staffers went to the 2009 conference but did not cover it. This was shown to be false but the Society continued to insist on payment for ODwyer reporters.

Although proclaiming its belief in democracy, the Society does not allow rank-and-file members to know who the Assembly delegates are, what they say, or how they vote.

There is no complete national list of delegates even for the delegates themselves because the list is on a voluntary basis.

Lets see if the new board that meets later this month will chart a new course for the association that claims to lead the PR industry worldwide.