After delivering the keynote speech at the 2004 Democratic national convention in Boston, there was never a question in my mind that then-little-known Barack Obama would become President of the U.S.

Obama's inspirational speech in the aftermath of the Tucson tragedy sealed a re-election bid. 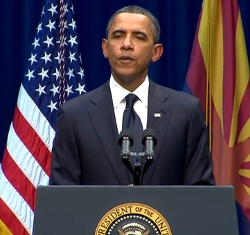 Obama spoke of unity. Palin attacked critics. Obama connected with the audience. Palin was overly scripted and robotic, a huge departure from her trademark folksiness. Obama spoke of civility. Palin implied that the U.S. should be grateful because todays heated rhetoric is a big step up from the days of Congressional duels. [In a bid to update those golden days of Congress, Texas Congressman Louie Gohmert plans to introduce a bill to allow congressmen to carry guns in the Capitol.]

There is just no side-by-side comparison. Obama was elected president in 2008. Yesterday, he became president.

Well-respected media trainer, Virgil Scudder, has nothing but high praise for Obamas performance. Scudder blogged that Obamas delivery was flawless. His variety in volume, pitch, pacing and pauses were exemplary. Must importantly, Scudder senses that Obama spoke from the heart. No speaker can achieve this level of performance if his feelings and words written for him do not fully align, he wrote.

The ultimate tribute: Scudder plans to use a video of the president's talk in training sessions.

The $364K question: How could Palin so misread the political climate following the murder of six people and the attempted assassination of a member of Congress]?

Now is not the time to lash out or claim victimhood. What on earth was Palin thinking? Or was she thinking at all?

Palin takes pride in relying on a loose network of political advisors. Husband Todd is said to be advisor No. 1 to Mama Grizzly. If serious about mounting a very uphill challenge to President Obama, Palin better call in some pros ASAP.

It will take a lot to rebound from the video disaster. The president is in full stride.