In one of the oddest but typical academic studies we have ever seen, a group of PR people and journalists are complaining about reporters around the world taking bribes from PR people  often in the $20-$30 range and labeled travel money.

The obvious advice is for PR pros to stop trying to bribe the media.

Title of this 24-page study is Cash for Coverage: Bribery of Journalists Around the World. (PDF) Author is Bill Ristow, who was with the Seattle Times 23 years, rising to metro editor, and who is now a journalist and international journalism trainer based in Seattle.

Given the carnage going on in paid media caused by the deluge of free news and information on the web, this study is like someone on the Titanic going around and opening more portholes.

Its an offshoot of a 2001 study initiated by the Moscow PR firm Promaco, which sent a fake news release to media and tracked how many wanted payment to run it. Journalists shot back that PR and ad agencies often refused to advertise unless the ads were presented as news stories.

Had there been a press conference, with Promaco taking any and all questions, the ruse would have quickly been uncovered.

Such open grillings of CEOs and other news sources have almost disappeared, not only in the U.S. but abroad.

Johnson & Johnson got off the hook in 1982 after seven murders via its Tylenol capsules partly because it never held a press conference. The J&J example became the standard in PR.


Study Preaches Distrust of the Media

The CIMA study preaches distrust of the media, something that will warm the hearts of some PR people.

This was a theme of the discussion on PR that took place at the 2010 Assembly of PR Society of America in Washington, D.C., Oct. 16. A slide said: News is no longer vetted and gate-keepers are being eliminated  much, if not most, of the content in the news media has become once again ideological with no attempt at fairness and objectivity according to the traditional concept of news and its news values.

The CIMA study quotes PR Prof. Dean Kruckeberg, co-chair of the PR Society Commission on PR Education, as saying, The role of journalism is becoming increasingly deprofessionalized and this has impact on the ethics of journalism. If you want to hold up the U.S. as a standard, you could say that rather than others become better, we should talk about how we are getting worse.

He is then indirectly quoted as saying there is a new burden on readers to determine the credibility and value of the information, compared to the days when you could just trust your local paper.

The study notes how poorly journalists are paid in almost all foreign countries ($40 monthly is average pay in Madagascar).

Strong, financially healthy media organizations do not have to take bribes.

The real question is how much financial support do companies, government bodies and non-governmental organizations (NGOs) give to the media that cover them? Do they ever buy any ads in the local press or is it strictly their aim to get as much free ink as possible?

Our guess is the local business and government communities keep the press on short financial strings, making reporters more susceptible to bribes.

The problem is that subscriptions by individuals to media throughout the world have dried up because of the web and organizations have yet to step into the void.

Aggressive reporters face death, jailing, lawsuits, banishment in many countries as tracked by the Committee to Protect Journalists.

As this Cash for Coverage study points out, they are also forced to take bribes if they expect to feed their families. They are reduced to beggars by well-paid PR people for organizations and governments.

Kruckeberg, now with the Center for Global PR at the University of North Carolina, is working with Tsetsura on a book to be published this spring: Transparency, PR and the Mass Media: Combating Media Bribery Worldwide.

The current Cash for Coverage study incorrectly describes Kruckeberg as a journalism professor.

He is a co-author of PRSAs 2007 report on PR education, which was critiqued by counselor Bill Huey of Atlanta in a column entitled PR Education Has a Lot to Learn.

The study called for creation of more Ph.D.s as PR teachers but Huey argued that experienced PR pros often made better teachers. Schools demand Ph.D.s because it helps them to become research universities and thus more likely to get government grants, he wrote.

Other questions are how open are government and private industry officials to press coverage?

How many press conferences are there?


NGOs Can Play Politics with Ads 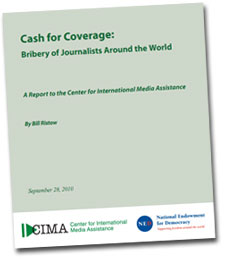 Advertising and subscription spending of local organizations should be tracked to see if any favorites are being played.

CPRF, which typically has more than $800,000 in cash and savings, obviously did not give much support to either PR Reporter or PR Quarterly, publications that died in their 50th years in 2009.

The CIMA study was funded by the National Endowment for Democracy, Washington, D.C., whose slogan is, Supporting freedom around the world. Revenues were $135 million in 2007, the latest year posted on GuideStar. EIN of the 501/c/3 is 52-1344831. Marguerite Sullivan is senior director.