Federal Communications Commission Commissioner Michael Copps is a long-time opponent of the merger wave that has rocked the media world.

True to form, Copps providing the sole no vote today on the FCCs approval of the massive Comcast/NBC Universal deal. 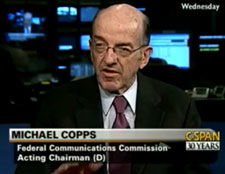 In his dissenting statement, Copps minced no words. The link-up does nothing to address the fundamental damage that has been inflicted by years of outrageous consolidation and newsroom cuts.

Copps claims he was rebuffed when he asked for a major commitment from Comcast management to beef up the quality of the news operation at NBC. Instead, Comcast promised more local news coverage.

Anyone tuning into a nightly news program knows how that is going to turn out. Look for more localized junk. New York City TV news coverage is overrun by health/beauty tips, overly hyped weather scares and assorted consumer fare.

Copps believes Comcast got off the hook by offering to add more local programming, which is no substitute for improving the quality of news by devoting the necessary resources.

Copps worries that Comcast will squeeze public TV stations. Might the public station be dropped to make room for yet more infotainment programming, he wrote. Thats a high stakes gamble that America shouldnt be willing to make.

The Commissioner is sure of one thing: Comcast is going to make a ton of money. But simply blessing business deals is not what the FCC is chartered to do. The FCC is responsible for ruling that that this new media giant will serve the public interest, according to Copps.

He believes the public is getting the shaft: The Comcast-NBCU joint venture opens the door to the cable-ization of the open Internet. The potential for walled gardens, toll booths, content prioritization, access fees to reach end users, and a stake in the heart of independent content production is now very real.

The Comcast/NBCU venture further erodes diversity, localism and competition, and is a damaging and potentially dangerous deal, wrote the FCC watchdog. The five-year term of Copps, who was chief of staff to former Senator Fritz Hollings runs through June.

President Obama should persuade Copps to stick around. The nation needs Copps on the beat to closely monitor the operation of the Comcast-NBCU behemoth.