Conspiracy theorists on the left and right speculate that Comcast ordered the firing on MSNBCs Keith Olbermann. They are nuts.

Glenn Beck is among those taking a victory lap in the aftermath of Olbermanns shocker announcement made Jan. 21 that hes finished with MSNBC. 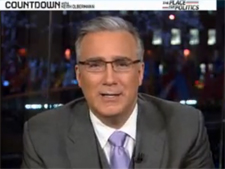 The pride of Fox News, has been predicting for months that Olbermann would be a goner once Comcast received its federal approval for the venture with NBC. His reasoning: Comcast would want to run MSNBC in a more business-like fashion.

Beck today berated Olbermann as the biggest pain in the ass in the world.

Olbermann, of course, has been a thorn in the Beckesters side. He compared Becks shtick to the Lonesome Rhodes character made famous by Andy Griffith in the A Face in the Crowd movie. The comfort of today's mythical homespun aw-shucks-TV-totalitarian-Lonesome-Rhodes Glenn Beck is that every day he gives away the essential truth that he is an idiot," said Olbermann in 2009.

Comcast has vehemently denied that it had anything to do with Olbermanns departure. This blogger, a huge fan of Olbermann, takes the Philadelphia-based cable giant at its word. It was only a week ago that Comcast received Federal Communications Commission approval for its deal with NBC. The company vowed that it would not to interfere with NBC's news programming. [A possible out: Olbermann ran an opinion program. That doesn't fly.]

It would be folly for Comcast to swoop in and immediately ax MSNBC's highest profile talking head, while the ink has yet to dry on the government approval documents. That would mock the FCC and raise the hackles of FCC Commissioner Michael Copps, who voted against the Comcast/NBC venture, a deal that he said reaches into virtually every corner of our media and digital landscape and will affect every citizen in the land.

What do conspiracy theorists expect next? Will Comcast force writers on 30 Rock to drop all future references to cheesy Kabletown, their codeword for Comcast.

As for Becks notion of Comcast wanting to run MSNBC more like a business, Olbermann and fellow liberal Rachel Maddow bolstered ratings to give dominant Fox a run for its money. Olbermanns Countdown was simply a good business proposition for MSNBC. The New York Times reported today that Olbermann has agreed to stay off TV for at least six months. I look forward to your return, Keith. There is a big election coming up in 2012.