Its been a year since the passage of Citizens United v. the Federal Election Commission, the landmark Supreme Court ruling that said corporations may now spend unlimited amounts of money to support or oppose political candidates of their choosing.

The SCOTUS decision, which removed any limits on independent campaign expenditures by corporations, trade associations and unions, effectively overturned the historic campaign finance reforms of McCain-Feingold, which held that corporations and unions cant use general treasury funds to pay for attack ads or otherwise sway a political race. 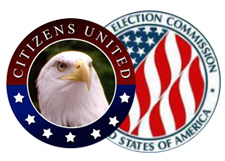 Citizens United drew a backlash of criticism from countless detractors in both the federal and private sector, who argued the decision would suppress transparency in elections and further entrench party candidates in special-interest politics. A year later, theres one fact everyone can agree on: campaign contributions have been through the roof. The 2010 Midterm elections saw a deluge of corporate money enter election campaign pools. Spending by outside interest groups was about $295 million, more than four times larger than the $69 million spent during the 2006 Midterms.

At the same time, direct campaign contributions also reached dizzying new heights. Candidates running for office in the House and Senate took in about $1.5 billion in campaign fundraising during 2010, and spent another record sum of nearly $2 billion. When added to independent expenditures by non-party groups, federal elections accounted for a $4 billion industry in 2010  $1.2 billion more than the $2.8 billion spent in 2006  and this figure doesnt even take into account state or local races.

If you took the total amount of money raised by both direct contributions to Congressional political campaigns and those raised by outside groups, and divided it by every American who voted in November, it would be the equivalent of writing each voter a check for $45.

Spend big, win big
One could argue that electoral spending increased in 2010 simply because there were so many hotly contested elections, rife with big issues and high voter interest. To make this claim would be to avoid the indisputable fact that voter numbers were universally low in November; only about 40% of eligible voters bothered to show up. Along party lines, Democrats comprised about 46% of voters while Republicans accounted for 53%. Voters under the age of 30  a demographic that accounts for big Democrat numbers  made up only 11% of the electorate in the 2010 Midterms, the lowest in decades. When historic incoming dollar amounts are shown in contrast to noticeably thin ballot counts, it becomes clear the 2010 election was influenced by a looming disparity.

Electoral spending skyrocketed for both parties in the months leading up to the 2010 Midterms. The contributing scales however, were noticeably tilted. According to the Center for Responsive Politics, for every $1 liberal organizations spent on political ads, conservative organizations spent more than double. Similarly, Republican Congressional candidates out-raised Democrats by nearly $30 million.

Democrats lost not only the House, they lost the message war. And while predicting electoral trends is never an easy endeavor, the 2010 Midterms was proof that money spent in politics is money earned. According to a January report released by Public Citizen, in 60 out of 75 Congressional races where political parties changed hands, the candidate that benefited the most from outside funds had an 80 percent chance of winning that race.


Corporate coffers shrouded in secrecy
Nearly half of the $295 million raised by outside sources in the months leading up to the 2010 Midterms came from only about 10 groups, with the lions share benefiting Republicans. Some are well known. The U.S. Chamber of Commerce, for example, raised more than $75 million and ran about 8,000 ads supporting Republican causes and candidates.

Crossroads Media, a Republican media services firm that holds Karl Rove as Senior Advisor, received more than $40 million to craft conservative messages for the masses. The Committee for Truth in Politics spent more than $7 million on ads to influence the 2010 Midterms. The organization is headed by attorney James Bopp, Jr., the former Republican Party Vice Chairman who was partially responsible for getting the Citizens United case into the Supreme Court.

In most cases however, the money trail simply runs cold. Unlike direct campaign contributions, the sources that fund independent groups arent required to disclose their roster of donors. For example, approximately 75% of Crossroads Medias funds come from undisclosed donors. Its for this reason a financial connect-the-dots linking corporations to the allowences of Citizens United is essentially impossible.

Another reason why its so hard to measure the impact of Citizens United is because it wasnt the only factor influencing the game. A separate SCOTUS decision in March gave rise to the creation of a new political committee known as independent-expenditure only committees, or more commonly Super PACs. A Super PAC allows corporations to raise and spend virtually unlimited amounts of money on political candidates as long as they dont coordinate those efforts directly with the candidates they support. Unlike expenditures by non-party groups however, they must disclose their donations to the Federal Election Commission. Almost as soon as it left the gate, Super PACs quickly became the new standard for politics. A September Washington Post report showed Super PACs accounted for more than $4 million in political spending during one week alone.

Many industries made it big regardless of who won at the polls. Broadcasters alone brought in about $2.5 billion in revenues from ads supporting federal, state and local campaigns, showing that if theres any industry thats recession proof, its politics.