The AP reports that Vick signed a two-year, "sizable" contract with Unequal Technologies to become its first corporate spokesman, the QB's first deal since his fall from grace. 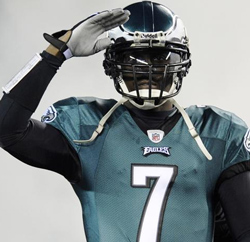 Said UT's CEO Rob Vito: "We're real excited about it. Michael is good people. He paid his dues. President Obama reached out to him. He deserves an opportunity. This is what makes America so great. He's moved forward. He's a whole other person."

While it's far from a mainstream, consumer-oriented endorsement deal, it is a start for Vick, who won over fans in Philadelphia and around the NFL this year with spirited play and a playoff run. [If you only knew how hard that sentence was to write for this Giants fan.]


"The reality is that if Vick continues to play at an elite level and the Eagles remain a playoff-caliber team (and dont run over any household pets), by the end of next football season he will perhaps have a chance to regain the marketability he had prior to his imprisonment."

What's next for Vick? We wrote back in 2009 that Vick had the opportunity to use digital tools to help with his PR comeback and it appears he's doing that more, as evidenced by a 325K-plus following on Twitter and some entertaining and thoughtful exchanges with fan tweets.